Battle over US election result could continue long after counting ends

America Letter: Threats from Trump only add to country’s struggle to count votes 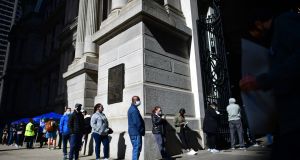 In Philadelphia this week, the juxtaposition was striking. Outside the historic City Hall, tents and queuing systems were established to accommodate early voting; across the street, a small 7-Eleven store was boarded up in anticipation of possible violence following another police shooting of an African-American man.

Nonetheless, in this election cycle, voters in Pennsylvania have a spring in their step, as they find themselves at the centre of a national debate about voter participation and democracy as America goes to the polls.

For the first time, Pennsylvania is allowing “no excuse” early voting, after the state legislature passed a Bill expanding who can vote by mail and vote early. Like elsewhere in the country, the take-up has been enormous. More than 83 million people have already voted across the US. But while the early voting system has worked better than many had expected following chaotic scenes in primary elections in Wisconsin, Georgia and New York earlier this year, the battle to count all America’s votes is only beginning.

By Tuesday this week voters across the country began receiving text messages and social media posts urging them not to mail their absentee ballot, because there was no guarantee it would arrive by election day given concerns about postal delivery times. Instead, officials encouraged voters to drop their ballots at designated “drop-boxes” where available, or vote in person on election day. Similarly, the early voting period varied by state. In Pennsylvania, early voting finished on Tuesday while it continues in Florida this weekend.

The supreme court also weighed in on several voting cases this past week. While two were decided after Amy Coney Barrett was sworn in on Monday, she did not participate, stating that she had insufficient time to review the filings. The last-minute flurry of election orders delivered very different outcomes. In two cases the court allowed Pennsylvania and North Carolina to accept votes that arrive after election day; but the court quashed a state court order in Wisconsin allowing votes to be accepted up to six days after.

Crucially, the court left open the possibility it could return to the Pennsylvania case after election day.

Justice Brett Kavanaugh’s written opinion in the Wisconsin case garnered much attention. While Kavanaugh was forced to correct a factual error about voting procedures in Vermont, the real interest was his assertion that counting votes after election day could “potentially flip the results of the election”.

The claim appeared to echo president Donald Trump’s erroneous assertion that counting votes after November 3rd could lead to a fraudulent result. Kavanaugh also cited Bush v Gore, the 2000 court ruling on the presidential election. But that decision, which ended the recount in Florida, was presented as a one-off by the court.

As the majority wrote at the time: “Our consideration is limited to the present circumstances.” Since then, the case has barely got a mention in any court decisions. But Kavanaugh has now said that it could be used in any election dispute that may arise.

With the margins so tight in states such as Pennsylvania – Trump won the state of 12 million people in 2016 by just 44,000 votes – the losing party could well challenge the result, and the supreme court could ultimately have to weigh in. Three of the justices on the nine-member court – Kavanaugh, John Roberts and Barrett – worked on the Bush v Gore Florida controversy 20 years ago, and Trump will be hoping that the conservative majority on the court will help his case.

One thing that appears certain is there will not be a final result on election night. Further, because Republicans are more likely to vote on election day and these votes are usually counted first, it is likely that early results may give the impression that Trump is ahead, whereas Joe Biden may catch up as absentee ballots are counted in subsequent days.

This played out in the 2018 midterm elections when the scale of the Democratic “blue wave” in the House of Representatives only became evident a few days after the election as final results came in. Similarly, in Arizona – a state that typically reports its results quickly – the outcome of the senate race shifted as more votes were counted. While Republican Martha McSally was leading on election day, Democrat Kyrsten Sinema won the race.

With Donald Trump continuing to question the validity and security of the election process, the battle about who wins the election may only begin on Tuesday. It could be a long few days – or weeks – in American politics.