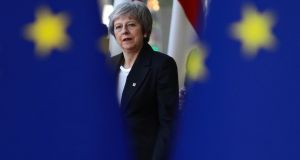 Theresa May arriving at the European Council for the start of the two-day EU summit on December 13th, 2018 in Brussels, Belgium. Photograph: Dan Kitwood/Getty Images

As the smoke cleared around Westminster after Wednesday’s confidence vote in Theresa May, it became clear that the exercise had weakened both the prime minister and the hardline Brexiteers who tried to bring her down. May’s acknowledgment that she cannot lead her party into the next general election was a statement of the obvious since few expected her to survive long beyond March 29th next year when Britain leaves the EU.

But by stating publicly that she has a sell-by date, she has given potential successors licence to campaign openly within the party and rendered herself a lame duck whose authority diminishes every day. And although she survived Wednesday’s vote, more than a third of her parliamentary party has no confidence in her leadership.

The prime minister’s assertion that a Brexit deal must have the support of the DUP if it is to win parliamentary approval reflects a belief in Downing Street that the DUP holds the key to reconciliation with hardline Brexiteers in the Conservative party. If May can negotiate changes to the terms of the backstop that satisfy the DUP, the theory goes, Conservative Brexiteers will have sufficient cover to fall into line behind it.

There are two problems with this strategy: nothing the EU would consider conceding on the backstop is likely to be sufficient to win over the DUP; and there is no evidence that the hardline Brexiteers are seeking an excuse to back the prime minister’s deal.

May’s would-be assassins emerged snarling into the morning on Thursday, with Dominic Raab suggesting that since they had failed to force her out of office she should now resign voluntarily.

“We will have to back her as best we can but the problem is that both in relation to Brexit and the wider sustainability of the government given the likelihood of any changes to the deal, given the likely scale of opposition it looks very difficult to see how this prime minister can lead us forward,” he said.

The Brexiteers had one shot at removing May from Downing Street before the end of the Brexit negotiations and they have blown it. She may be a lame duck but she is immune from a leadership challenge for 12 months.

The confidence vote further weakened the hardliners by revealing the limits of support in Parliament for a no-deal Brexit. Even if all 117 MPs who voted against the prime minister would also back a no-deal Brexit (a dubious assumption) they account for just over a fifth of the membership of the House of Commons.

May’s former policy adviser predicted on Thursday that she would have to bring her Brexit deal before the Commons a number of times before it is approved.

“I think there will be at least one if not two or three defeats before opposition MPs and Conservative MPs start to realise that they’ve done their signalling and now it’s real. One of the reasons I think it’s important that the prime minister stayed is that whoever leads through this, I think, will be finished by it,” he said.

But unless the EU agrees to a legally binding text that renders the backstop inoperable, neither the DUP nor Conservative Brexiteers are likely to support it. MPs will be able to introduce amendments to the motion on the Brexit deal, telling the prime minister what course they want her to take.

Some ministers suggested at last week’s cabinet meeting that MPs should have an indicative vote to test support for various options on Brexit. If the House, as expected, rejects the idea of leaving the EU without a deal and it also rejects May’s deal, two options remain.

There may not be a majority in Parliament for a second referendum now but support is likely to grow as other options fall away. And if May’s deal is rejected, she could be faced with a choice between a no-deal Brexit and sending the decision back to the people.