Pressure builds on May to delay Brexit deal vote 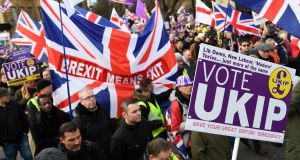 Theresa May is under growing pressure to postpone Tuesday’s vote on her Brexit deal and to attempt to persuade the European Union to renegotiate it. Brexit secretary Stephen Barclay said on Sunday that the vote would go ahead as planned, despite the fact that dozens of Conservative MPs have said they will vote against the prime minister’s deal. “The vote is going ahead and that’s because it’s a good deal and it’s the only deal,” Mr Barclay told the BBC.

Some Conservatives fear that pressing ahead with the vote will lead to a crushing defeat for Mrs May which could doom her Brexit deal and her premiership. Former foreign secretary Boris Johnson said on Sunday that the prime minister should insist that Britain be able to unilaterally end the Northern Ireland backstop. “Is it possible for us to reword this Northern Ireland Protocol, the 174-pages, so as it give the UK a unilateral exit mechanism? Yes, it is. And indeed the UK drafted such proposals but then failed to table them. That is the way to go,” he said.

Mr Johnson refused to promise that he would not seek to replace Mrs May as prime minister, joining two other former ministers, Esther McVey and Dominic Raab, who declined to rule out a bid for the Conservative leadership. Mr Raab, who resigned as Brexit secretary last month, claimed that the European Commission’s secretary general Martin Selmayr wanted to make Northern Ireland the price for Britain leaving the EU. “You would hear swirling around in Brussels, particularly people around Selmayr . . . that losing Northern Ireland would be the price the UK would pay for Brexit. This was reported to me through the diplomatic channels,” he told Sky News.

Mr Raab said that leaving the EU without a deal was better than accepting Mrs May’s Brexit deal but he said she could stay on as prime minister even if she loses Tuesday’s vote. He said she could return to Brussels and tell the other 27 EU member states she wanted to renegotiate the deal. “If parliament has voted the deal down I think she can go and say this deal doesn’t work for the United Kingdom, ” he said.

Former Conservative attorney general Dominic Grieve, who wants a second referendum on Brexit, warned on Sunday his party could split over the issue and find itself unable to continue in its current form. “I can see that this is of such a fundamental character, this issue, that it may be the end of the Conservative Party in its current form, and that bothers me very much because one of the products of Brexit has been total paralysis on virtually every other area of policy,” he said. In central London on Sunday, anti-fascist demonstrators massively outnumbered those at a “Brexit betrayal” march led by Stephen Yaxley-Lennon, a far-right figure who styles himself Tommy Robinson.

Elsewhere in London, the former Conservative deputy prime minister Michael Heseltine told supporters of a second referendum that opposing Brexit was an act of patriotism: “Let us make our position clear. We are the British patriots. We want a Britain at the heart of Europe because we want the voice of Britain, the tolerance of Britain, the culture of Britain, at the heart of Europe. We are proud of our Commonwealth and empire. Our voice is their voice in Europe. It is the Brexiteers who seek to belittle us, to undermine our influence, to slam windows, to close doors with the suggestion that our membership of the European community blunts our influence.”