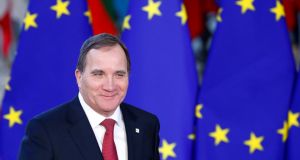 Sweden’s parliament has rejected Stefan Lofven’s attempt to remain as prime minister, pushing the Scandinavian country a step closer to fresh elections as its political parties struggle to deal with the rise of populists.

Mr Lofven, leader of the centre-left Social Democrats and acting prime minister, was voted down 200-116 on Friday morning, leaving Sweden without a government more than three months after parliamentary elections.

Political scientists said the chances of a new vote had risen as both Mr Lofven and Ulf Kristersson, the main leader of the centre-right opposition, have been voted down by parliament. Before this year, no Swedish prime ministerial candidate had ever been voted down by MPs. New elections are obligatory after four such failed votes.

“I note that the parties in parliament are pushing Sweden closer to fresh elections. I’m sorry about that, and I will do everything I can to prevent it but if the parties choose new elections over acting in a way that will give Sweden a new government then I will not stand in the way of them,” said Andreas Norlen, the speaker of the parliament, who leads the government formation talks.

Swedish politics is struggling to adapt to the increasing support for the anti-immigration, nationalist Sweden Democrats, who polled 17.5 per cent in September’s elections. All other parties have ruled out active co-operation with them while most have also said they would not join a government that depended on the Sweden Democrats’ passive support in parliament.

Business leaders still hope parties can find a solution either by backing a centre-right government — which would need at least some support from the nationalists — or a cross-party centrist government. “It is time for politicians to find the pragmatism they are meant to be known for,” said one Swedish banker.

Parliament this week passed the centre-right budget proposed by Mr Kristersson’s Moderate party, meaning that any new government would have to use these spending plans in 2019.

Crucial to any possible coalition are two smaller centre-right parties, Centre and the Liberals. They refused to back Mr Kristersson’s first attempt to form a government as it would rely on the votes of the Sweden Democrats.

They then opened the door to Mr Lofven if he agreed to a series of demands – many of which were at odds with the main trade union backers of the Social Democrats – but they both voted against him on Friday after accusing him of not being ready enough to compromise.

Some observers think that Annie Loof, Centre party leader, is in a good position to try to become prime minister, even though she failed when given an informal mandate to sound out the possibility of forming a government. “We have negotiated both for a centre-right government and a centrist government. We are still flexible,” Ms Loof said, adding that one or both of the Moderates or Social Democrats had to change tack and “take responsibility”.

Sweden is only the latest European country to deal with the difficulties of forming a viable coalition due to political fragmentation. Latvia is also struggling to find a new government as it seeks to exclude the biggest party due to its links to Russia and ethnic Russians. Sweden still has some way to go before beating Belgium, which went almost 600 days without an elected government in 2010-11. – Copyright The Financial Times Limited 2018.