Country to ‘move forwards as one United Kingdom’ with Brexit, Boris Johnson says 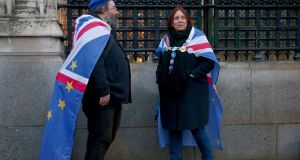 Boris Johnson’s Brexit deal is set to become law on Thursday after both houses of parliament approved the Withdrawal Agreement Bill on Wednesday afternoon. After MPs rejected all amendments passed by the House of Lords, peers approved the Bill in the form backed by the Commons.

“At times it felt like we would never cross the Brexit finish line, but we’ve done it. Now we can put the rancour and division of the past three years behind us and focus on delivering a bright, exciting future – with better hospitals and schools, safer streets and opportunity spread to every corner of our country,” Mr Johnson said.

European Council president Charles Michel and European Commission president Ursula von der Leyen are expected to sign the withdrawal agreement in Brussels on Friday and Mr Johnson will do so in the next few days. The European Parliament will hold its consent vote next Wednesday and Britain will leave the EU two days later.

Mr Johnson said on Wednesday night that, after Brexit, the country would “move forwards as one United Kingdom”. But the Scottish parliament, the Welsh assembly and the Northern Ireland Assembly have all voted against the Withdrawal Agreement Bill – with every elected representative at Stormont voting against it.

Asked by the DUP’s leader at Westminster, Jeffrey Donaldson, if his commitment to “unfettered access” for Northern Ireland businesses to the rest of the UK market also applied to goods moving from Great Britain to the North, the prime minister said “emphatically, it does”.

Wigan MP Lisa Nandy on Wednesday joined shadow Brexit secretary Keir Starmer in reaching the final ballot for the Labour leadership after she won the endorsement of two trade unions and the Chinese for Labour group. Shadow business secretary Rebecca Long Bailey is expected to cross the final hurdle on Friday when the union Unite decides which candidate to support.

Shadow foreign secretary Emily Thornberry is struggling to win the support of enough Labour affiliates or constituency parties and backbencher Jess Phillips, who withdrew from the contest on Tuesday, has endorsed Ms Nandy.

Ms Long Bailey, the candidate closest to Jeremy Corbyn’s leadership, on Wednesday defended the policies Labour proposed ahead of last month’s general election but said the party got its messaging wrong.

“It was one of the most devastating defeats that we’ve ever suffered, and there were vast myriads of reasons as to why that happened. Brexit was one, we knew it was a Brexit election and our compromise position didn’t satisfy our communities and meant that we weren’t trusted,” she told BBC News.

“We didn’t tackle anti-Semitism and we weren’t trusted to deal with that issue within our own party and our messaging really didn’t resonate with voters; we should have been talking about aspiration and how all of the things within our manifesto would improve your life, would improve the outcome for businesses in our areas, but we didn’t say that. Quite often we talked about handouts and how we would help people rather than providing that broad positive vision of the future.”