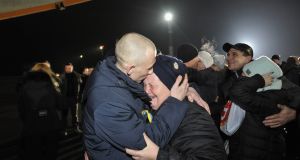 Ukrainians freed by pro-Russian rebels during a prisoner exchange are welcomed in Kiev on December 29th, 2019. Photograph: Sergei Chuzavkov/AFP 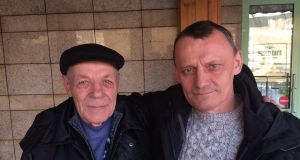 Oleksiy Syzonovych (left) and Mykola Karpiuk returned to Ukraine in September from jail in Russia, where they say they were tortured and convicted on trumped-up charges. Photograph: Daniel McLaughlin 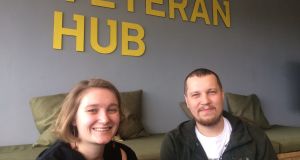 Ivona Kostyna and Artem Denisov work at the Veteran Hub in Kiev, a drop-in centre for former soldiers, ex-prisoners of war and others who need help. Photograph: Daniel McLaughlin 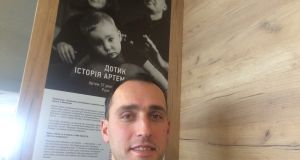 Artem Khorunzhyi, a former lawyer, was captured and mistreated by Russian-led separatists while fighting for a Ukrainian volunteer battalion in 2014. Photograph: Daniel McLaughlin

After more than five years in captivity, Mykola Karpiuk did not believe he was really going home until he boarded a Ukrainian plane at Moscow’s Vnukovo airport.

It was the end of his ordeal in Russia – which he says included beatings, electric shocks and threats to his family – but freedom would bring its own challenges.

“When we landed in Kiev, I stood on the steps of the plane and suddenly felt drunk. I can’t really remember how I got down the steps,” Karpiuk recalls of his return last September, when Ukraine and Russia freed 35 of each other’s citizens.

“I’d been in an enclosed area for so long that seeing that huge space was really stressful. And I’d been on my own in a cell for three years or more in total, and there were so many people gathered there to meet us,” he says.

“I thanked President [Volodymyr] Zelenskiy that I was free and then as the crowd ran towards the steps of the plane I sort of wandered off under the wing of the plane. I only came to my senses and realised where I was and what was happening when I was standing by the terminal and couldn’t go any further.”

The returnees, including film director Oleh Sentsov, were hailed as heroes, and the same welcome was given to 76 people freed last month by Russian-led militia in eastern Ukraine, in exchange for Kiev handing over 127 detainees to them.

Zelenskiy says Kiev is now negotiating for the release of more Ukrainians from Russia and separatist-run areas of Donetsk and Luhansk regions, and he hopes prisoner swaps will reduce hostilities and pave the way for eventual peace with Moscow.

As Karpiuk and other former detainees told The Irish Times, however, returning from months or years of often brutal captivity can be fraught with problems, which present Ukraine with another challenge as it struggles not only to end the war but reintegrate hundreds of thousands of veterans into civilian life.

Karpiuk was seized on the Russia-Ukraine border in March 2014, when Moscow annexed Crimea and began fomenting unrest in Donetsk and Luhansk in response to a revolution that had ousted Kremlin-backed leaders from Kiev.

He travelled to Russia having been convinced by a trusted acquaintance that the country’s president, Vladimir Putin, wanted to establish contact with the Ukrainian ultra-nationalist movement that had gained prominence during the revolution and in which Karpiuk was a leading figure.

At that chaotic time, Karpiuk says he saw the possibility of talks with the Kremlin as a chance to avert a war that has since killed about 14,000 people and displaced 1.6 million – but it was a trap.

Karpiuk says he was beaten and given electric shocks and told that his then nine-year-old son would be abducted and tortured unless he testified to killing Russian soldiers while fighting in Chechnya in the 1990s.

He insists he was never there and gave a false “confession” to protect his son, but a court in Chechnya jailed him for 22 years in what Amnesty International called a “blatant travesty of justice” and a “propaganda-driven show trial”.

“But as well as getting over the physical effects, it is hard in some ways to adapt. Ukraine changed so much in the 5½ years I was away, so to come back into this society and understand what’s happened and everything that’s going on here has been quite difficult.”

Ukraine was utterly unprepared for war, and just as volunteers gave vital support to the military at the start of the conflict, so NGOs have shown a poor and bureaucratic state how best to assist fighters returning from the front.

On the 20th floor of a television centre in Kiev, the Veteran Hub offers help ranging from psychological support to legal and employment advice and English classes to former soldiers, emergency workers, ex-prisoners of war and the relatives of those killed and missing in action; about 1,800 people visit each month.

“Ukraine has 380,000 veterans who will develop some of the consequences [of combat] over time,” says Ivona Kostyna, co-founder of the modern and welcoming 800sq m drop-in centre and of an NGO called Pobratymy (Brothers in Arms).

“We know that post-traumatic stress disorder can develop five, 10 or 15 years after someone has left the battlefield, and concussion and traumatic brain injuries can have consequences years after they occur. I would say the government has not done enough to prepare to deal with those problems when they arise.”

One of Kostyna’s colleagues at the Veteran Hub is Artem Khorunzhyi, who left a well-paid job in a Kiev law firm to join the Donbas volunteer battalion in 2014.

He was captured that August during the bloody battle for Ilovaisk and held in a Donetsk basement for four months. He was forced to do hard and dangerous labour for the separatists, who beat him and fired shots next to his head in a mock execution; Russia and the militia say Ukraine mistreats detainees in similar ways.

“I was totally exhausted. That lasted for a few weeks but basically I thought ‘I’m free so everything is okay.’ But you’re not okay. I would argue with people and get really angry; I threw a guy off the bus for not buying a ticket. After being kept prisoner you have a lot of energy inside you, and you can use it in a good way or a bad way or hit the bottle.

“I got depression later on. But I stopped drinking in summer 2015 and that was one of the most important things for me . . . I think everyone will be changed by something like this – you have to decide what this change will mean for you.”

For Oleksiy Syzonovych (63), an impish miner from the separatist-held town of Krasnodon in Luhansk region, release from a Siberian jail last September meant having to start a new life in bustling Kiev, far from friends and relatives.

He says he was tortured before being given 12 years in jail for planning “terrorist attacks” in another bizarre and flimsy case, but now his health is improving and – like Crimean film director Sentsov and several other returnees who cannot go back to their former homes – he has been given an apartment in Kiev by one of Ukraine’s richest businessmen, Viktor Pinchuk, who also funds the Veteran Hub.

“How did I feel when we landed in Kiev?” says Syzonovych.

“That it’s finished. That hell is over. I’m home.”