Our Lady of Paris: a history of Notre Dame cathedral

To many Parisians, the 850-year-old landmark is simply the heart of their city 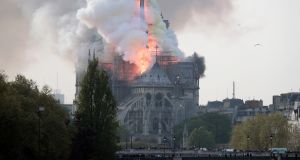 Flames on the roof of the Notre Dame cathedral in Paris on Monday. Photograph:Ian Langsdon/EPA 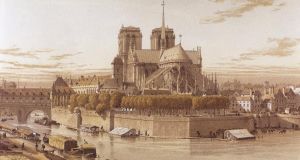 A representation of Notre Dame cathedral in Paris in 1750. It underwent major restorations in the mid-19th century. Photograph: Prisma/UIG/Getty Images 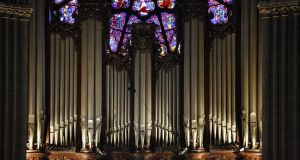 There are fears about the fate of the extraordinary three “rose” stained glass windows in Notre Dame cathedral and the master organ. Photograph: Godong/Universal Images Group via Getty Images

Notre Dame de Paris – Our Lady of Paris – has been one of the most enduring and symbolic monuments of the French capital and among the most celebrated cathedrals in Europe.

To many Parisians, the 850-year-old landmark is quite simply the heart of their city, its two Gothic square towers rising above surrounding buildings along the Seine.

It is the cathedral of French cathedrals, with one of the longest and richest of histories: the site of royal weddings, the consecration of Napoleon Bonaparte as emperor and the beatification of Joan of Arc. It is also where the public celebrates the lives of the great and good.

It was at Notre-Dame that the king of England, Henry VI, was crowned king of France in 1431 and king of Scotland, James V, married Madeleine of France in 1537. Requiem masses were held there for presidents Charles de Gaulle and François Mitterrand.

The cathedral was immortalised in popular culture by Victor Hugo in his Gothic novel The Hunchback of Notre Dame, later turned into a Disney film.

Notre Dame cathedral was commissioned by King Louis VII who wanted it to be a symbol of Paris’s political, economic, intellectual and cultural power at home and abroad. The city had emerged as the centre of power in France, and needed a religious monument to match its new status.

A medieval basilica occupying the site chosen by the king at the eastern end of the Île de la Cité, one of two islands in the Seine, was torn down to its foundations so the new cathedral could be built.

The first stone of what was to be a massive edifice measuring 130m long and 48m wide, is said to have been laid in 1163, in the presence of Pope Alexander III, but it took another 200 years to complete and underwent frequent modifications in the following centuries.

The two towers on the west facade, measuring 69m high, were built in the early 13th century. The north tower is accessible to visitors via a 387-step staircase, while the south tower is home to the cathedral’s 10 bells. Among the most famous of the bells, the bourdon – named Emmanuel – has tolled at most major events in the history of France, including the coronation of kings, papal visits and to mark the end of two world wars.

It was also rung to mark the destruction of the Twin Towers on September 11th, 2001 in New York. The original spire, built around the same time as the towers, was removed in the 18th century but later replaced.

Desecrated during the French Revolution, by the early 19th century, the cathedral was was crumbling and half-ruined inside. The crowning of Napoleon as emperor followed by the success of Hugo’s novel focused attention on the building, prompting major restorations in the mid-19th century.

As well as the wooden rib-vaulted ceiling which has been largely destroyed by the fire, there are fears about fate of the extraordinary three “rose” stained glass windows and the many historical artefacts inside the cathedral, including the 17th-century organ. Several precious religious relics, revered by Catholics, were inside the building. On the roof there were also a number of beehives.

As well as a historic monument and tourist attraction – drawing between 14 and 15 million visitors a year - Notre Dame is also the heart of the Roman Catholic church in Paris.

As the fire raged on Monday evening battled by 400 firefighters, the former mayor of Paris Bertrand Delanoë could barely conceal his emotion saying he was “immensely sad” at the destruction of the cathedral. He added: “It’s an inestimable loss . . . Notre Dame de Paris has to live. We must not resign ourselves to this . . . this is the heritage of all humanity.” – Guardian