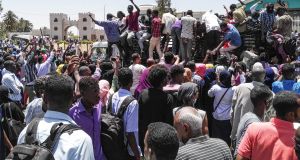 Protesters rally in front of the military headquarters in the Sudanese capital Khartoum on Monday. Photograph: AFP/Getty Images

Sudanese soldiers have intervened to protect demonstrators demanding the overthrow of President Omar al-Bashir in a sign that the security apparatus around the 30-year-old regime is fracturing.

Video footage showed some soldiers firing warning shots in the air after members of the security services and militia loyal to Mr Bashir moved to break up a two-day sit-in in front of the army headquarters in Khartoum. One soldier was killed in the confrontation, according to protest organisers.

Several thousand demonstrators, who include young professionals, have vowed to remain in front of the compound until Mr Bashir steps down, marking a new phase in street protests that have jolted the country for the past three months.

“It is clear that the army tried to avoid confrontation with the demonstrators. The army is trying to protect them,” said Rashid Saeed, a spokesman for the Sudanese Professionals Association, which has been at the forefront of the protests, which began in December.

“We cannot say the army is speaking as one block. You have soldiers and junior officers who are clearly supporting the demonstrators and the ousting of Bashir,” he said. “But you have generals in the army headquarters, militia and members of the security forces who are still supporting Bashir.”

Demonstrations were sparked by public fury over rising bread prices but have since spread to 35 cities and escalated into unprecedented calls for Mr Bashir, an ageing autocrat, to step down.

Armed men loyal to Mr Bashir (75) moved to break up demonstrations in the early hours of Monday morning after a day during which the embattled president was in discussions with his military and civilian advisers.

Leaks from that meeting – itself a sign of splits among the president’s entourage –had already indicated that a decision had been taken to break up the sit-in before it became entrenched. All sides are acutely conscious of how events unfolded in Algeria where last week mass demonstrations forced President Abdelaziz Bouteflika to step down.

In Khartoum crowds shouted “the army is protecting us” and “one nation, one army” when soldiers intervened to shield demonstrators, according to Reuters. Protesters read out a statement calling for Mr Bashir to step down unconditionally and urging the international community to support the demands of what they called the “Sudanese revolution”.

Hassan Ismail, the information minister, contradicted reports the protest was continuing, saying that demonstrators had been successfully dispersed.

“The crowd in front of the general command has been cleared completely, in a way that resulted in no casualties among all parties,” he said. “The security apparatus are coherent together and working with positive energy and in harmony.” However, witnesses and video shared on social media suggested the protest continued unabated.

Mr Bashir is reluctant to step down partly because he faces charges by the International Criminal Court over alleged genocide and human rights abuses in Darfur, a region in western Sudan.

Attempts to negotiate immunity for Mr Bashir have been thwarted by both internal and external opposition. Several countries, including Saudi Arabia and Egypt, have offered him exile, according to people familiar with discussions.

Even if the president, who was installed in a 1989 coup, steps down, it is unclear what would follow. Protest organisers have explicitly opposed a military coup.

“Inside the army, the pressure is very strong to move in and to take power, but this is not a solution for us,” said Mr Saeed of the Sudanese Professionals Association. “If the army takes over it would be a military coup. We are asking the army to be on the side of the demonstrators and help the opposition forces and its allies to take power through peaceful transitional government in which the army would be represented.”

Those demands had been presented in a written memorandum, but there was no formal dialogue between protesters and the armed forces, he said. – Copyright The Financial Times Limited 2019