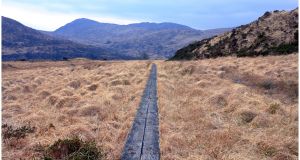 Landowners have been urged not to start any gorse fires as they are diverting firefighters away from house fires, car crashes and other life threatening emergencies during the coronavirus pandemic.

Kerry’s chief fire officer Andrew Macilwraith said the service and its 100-plus firefighters were already under strain from provisions linked to the pandemic.

Mr Macilwraith said the service has attempted to lessen the number of firefighters in vehicles so as to limit the need for self-isolation should one of them test positive for the virus.

He said the current spate of gorse fires is putting a huge strain on the service.

“There are two aspects to fighting gorse fires - one is that when our brigade is taken away from their station and has to go up a mountain to fight a fire with their equipment, they are away from their base and take longer to respond,” he said.

“The second aspect is that if they are out for seven hours fighting a gorse fire as happened in the National Park in Killarney last night, they are clearly exhausted when they return to their base.

“They might be just about to try and get some rest when a call comes in that there’s been a serious road collision so they respond, but it’s not ideal to have people heading out exhausted to a serious incident.”

Mr Macilwraith said the service was called out to 13 gorse and bog fires on Saturday, which meant six of its 10 brigades were dealing with the issue and unavailable in the event of another emergency arising.

“People need to be aware that if they start burning gorse now, they are drawing on the emergency services at a time when they have a lot of other things to do but if a brigade has to self-isolate, our numbers will be reduced.”

Mr Macilwraith said the gorse fire at the Killarney National Park on Sunday night saw around 20 firefighters from Killarney and Kenmare spending more than seven hours extinguishing the blaze, which spread across 150 acres.

He said the fire was possibly started by somebody throwing away a lit cigarette butt and that nobody should be burning gorse in the national park or anywhere else at this time of year.

“People should not be burning gorse from March to August. Even though the ground may still be wet underfoot, gorse and vegetation dries out very quickly in the sunshine so the vegetation is very flammable at the moment,” he said.

“We have enough demands being put us on the moment without having to deal with fires that could be avoided if people heeded our advice.”

Minister for Heritage Josepha Madigan condemned those who started the fire in Killarney National Park as “reckless and irresponsible” and said “the full rigour of the law will apply” if they are caught.

“This is a despicable and heinous crime at the best of times but more especially now. It is a malign act which has diverted emergency services at this critical time in our country,” she said.

“It is illegal to burn land at this moment and those that do face penalties. It is now prime season for nesting birds, breeding mammals and regeneration of growth and habitats after the winter.”

Ms Madigan said the cause of the fire is still under investigation and the National Parks and Wildlife Service will be following up with gardaí and Kerry Fire Services to ascertain the circumstances surrounding the blaze.

“I would like to take this opportunity to thank the Kerry Fire Service and the National Parks and Wildlife Service staff in Killarney who worked tirelessly through the night to quench the fire in the Dinis region of the park.”