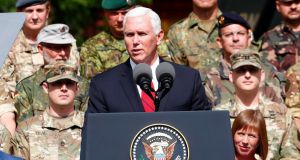 US vice-president Mike Pence delivering a speech on a visit to Nato troops in Estonia on Monday. He heard warm praise for the US sanctions on Russia during talks with leaders of the three Baltic states. Photograph: Ints Kalnins/Reuters

As Moscow expels hundreds of US diplomats in angry response to new sanctions, Washington’s move is also exposing deep divisions in the European Union over energy policy and a major Russian-led pipeline project in the Baltic Sea.

US president Donald Trump is expected to sign a Bill tightening and extending sanctions on Russia for its undeclared war against Ukraine and alleged meddling in last year’s US election, and his Russian counterpart Vladimir Putin reacted by ordering 755 US diplomats and other staff to stop work in his country.

The measures were greeted very differently by US allies in the European Union, however, highlighting a broad east-west split over Russian energy and a US Bill that could see European firms sanctioned for doing pipeline deals with Moscow.

At the heart of the dispute is Nord Stream 2, a €9.5 billion pipeline project led by Kremlin-controlled energy giant Gazprom, which from 2019 is intended to double the volume of Russian gas pumped under the Baltic Sea directly to Germany.

Major German, French, Dutch and Austrian firms are helping to finance the scheme, but countries across eastern Europe and Scandinavia say it contradicts the long-held EU ambition to reduce dependence on Russian fuel and to prevent Moscow using energy supplies for political leverage.

Nord Stream 2 would allow Russia to turn off gas flow to Ukraine – depriving the country of fuel and lucrative gas transit fees – and bypass EU members in eastern Europe while maintaining supplies to major customers like Germany.

While one stated aim of the sanctions Bill is to reduce EU reliance on Russian energy, sceptics in Germany and elsewhere suspect the US hopes to sell much more of its own gas to Europe to replace fuel from the east.

German economy minister Brigitte Zypries said it was “against international law, plain and simple” for the US to punish EU firms for their dealings with Russia.

“The Americans can’t punish German companies because they have business interests in another country,” German newspapers quoted her as saying on Monday.

“Of course, we don’t want a trade war. But it is important the European Commission now looks into countermeasures.”

Also on Monday, however, US vice-president Mike Pence heard warm praise for the sanctions during talks with leaders of the three Baltic states in Estonia.

“We do see huge pressures, unconventional pressures on us – it is cyber attacks and also energy,” said Dalia Grybauskaite, president of Lithuania, which in 2014 opened a terminal for liquefied natural gas (LNG) deliveries to break Russia’s erstwhile gas monopoly in the region.

“Before we opened LNG in Lithuania . . . we paid for gas 40 per cent more than Germany was paying, because Russia always used energy projects as a tool of influence, a tool of suppression and a tool of manipulation,” she said.

“I welcome very much the US Senate’s decision, and hope very much that president Trump will support this decision for imposing sanctions”.

Lithuania expects its first delivery of LNG from the US this month, and Poland received its first shipment in June.

In Warsaw last month, Trump said he wanted to ensure that “Poland and its neighbours are never again held hostage to a single supplier of energy.”

Further west, however, the increasingly aggressive US policy – in keeping with Trump’s “America First” slogan and pledge to reinvigorate US energy firms – is only raising hackles.

“If our concerns are not taken into account sufficiently, we stand ready to act appropriately within a matter of days,” European Commission chief Jean-Claude Juncker warned last week.