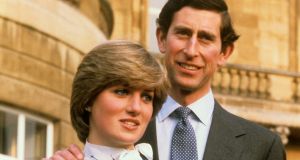 File photograph dated February 24th, 1981, of the Prince of Wales and Princess Diana on the grounds of Buckingham Palace, London, England, after announcing their engagement. File photograph: PA/PA Wire

One of Princess Diana’s closest friends is writing to Channel 4 bosses asking them to scrap a forthcoming documentary that uses private video footage which includes Diana talking about her sex life with Prince Charles.

Rosa Monckton, a confidante of Diana until the princess was killed in a Paris car crash 20 years ago next month, will argue that the confessional videos, which Diana made as part of a course of speech-coaching, amounted to therapy and that using them is an “intrusion” and “outrage” that betrays Diana’s right to privacy.

The documentary is due to be broadcast on Sunday, August 6th, and Monckton’s intervention will increase pressure on Channel 4 after Diana’s brother, Earl Spencer, reportedly demanded the programme be dropped.

Spencer is believed to have complained that the documentary would hurt Diana’s sons, Prince William and Prince Harry.

The broadcaster confirmed that it had been in correspondence with Spencer but defended the programme, claiming the recordings, while made in private, were “an important historical source”. The princes have declined to comment.

“This doesn’t belong in the public domain,” Ms Monckton told the Guardian. “It is a betrayal of her privacy and of the family’s privacy. I certainly don’t think they should be broadcast. The [tapes] should be dispatched to the young princes.”

The key source material for the film, Diana: In Her Own Words, comes from recordings the princess made in 1993 with her public-speaking coach Peter Settelen, in which she talked about her life. The recordings were ostensibly made to help her improve her speeches on issues such as landmines and HIV.

The tapes include her saying that sex with Charles happened “once every three weeks” and that, aged 24 and already married, she “fell deeply in love” with an unnamed member of the royal household, who is widely thought to have been the close protection officer Barry Mannakee, who later died in a motorcycle accident.

She recalled that, in 1979, two years before their wedding, “Charles chatted me up. He was like a bad rash.”

She added: “He was all over me and I thought, you know: ‘Urgh.’ Whereupon he leapt upon me and started kissing me and everything, and I thought, ‘Waaah! This is not what people do.’”

She also talked about the engagement interview with Charles, in which he was asked whether he was in love and answered: “Whatever ‘in love’ means.” She recalled to Settelen that she had said yes, she was in love, “like the fat Sloane Ranger that I was”.

The frank documentary is understood to have led to concern in palace circles over whether it is a consequence, at least in part, of Prince William and Prince Harry’s strategy of speaking out emotionally and in highly personal terms in the run-up to the 20th-anniversary of their mother’s death.

The princes co-operated with both the BBC and ITV on recent documentaries on the princess and have made a series of emotional statements about their grief.

It marked a departure from the usual royal protocol of carefully guarding private matters and contrasted with their decision not to say anything about their private feelings on the 10th-anniversary of her death in 2007, when they staged a pop concert at Wembley stadium in their mother’s memory.

Some courtiers are understood to be concerned that one consequence of such an open approach is more intrusive documentaries, which may ultimately be damaging to the reputations of Diana and Prince Charles and upsetting for their sons.

“It has been ill thought through,” said one source, who remarked that co-operating with two broadcasters only sent other broadcasters “scrambling for whatever [other material] they can get.

“Prince Harry and the Duke [of Cambridge] sort of have to take what they get now,” the source said. “I don’t believe Diana is being remembered now as the saint she has been painted to be. They will be thinking this is terribly unfortunate and they have been ill-advised.”

However, William and Harry are understood to be resigned to the fact that the 20th-anniversary of their mother’s death will spark a proliferation of new TV programmes, not just in the UK but also in the US and Europe.

They are understood to feel that co-operating with the BBC and ITV would not have contributed to the way other broadcasters are choosing to commemorate their mother’s death.

Monckton was a close friend of the princess and holidayed with her in Greece a fortnight before the fatal car crash in Paris that claimed her life on August 31st, 1997. She said she was around Diana when she made the tapes with Settelen.

“It was like therapy, what she was doing,” said Ms Monckton. “I was around at that time. It was very wrong of him to ask all those leading questions and it was naive of her to have agreed to do it, but nonetheless it was like a therapy and therapy should remain private.”

She said that to broadcast these tapes to the nation is an “intrusion” and would likely be painful for the princes.

“It is unimaginable what it must be like for them, and I think one of the things they have struggled with is this public ownership of their mother,” Monckton said. “That is a very difficult thing to get your head around.”

A spokeswoman for Channel 4 said: “The excerpts from the tapes recorded with Peter Settelen have never been shown before on British television and are an important historical source.

“We carefully considered all the material used in the documentary and, though the recordings were made in private, the subjects covered are a matter of public record and provide a unique insight into the preparations Diana undertook to gain a public voice and tell her own personal story, which culminated in her later interview for Panorama.

“This unique portrait of Diana gives her a voice and places it front and centre at a time when the nation will be reflecting on her life and death.”