Opposition alliance comes together to plan rallies, strikes and blockades to start 2019 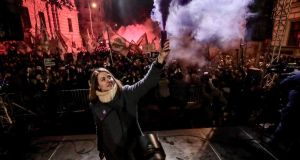 When Hungary’s proudly illiberal government rails against “foreign-trained activists” and “Soros-network putschists” that it sees behind recent street protests, it seems to have people such as Anna Donath in mind.

Ms Donath studied sociology with a focus on migration at universities in Budapest and Amsterdam, and then completed an internship at the European Commission before returning to Hungary, where she worked for an NGO that helps asylum seekers with funding from liberal philanthropist George Soros.

Now Ms Donath (31) is a deputy leader of Momentum, a young party at the forefront of the protest movement, and a new face of the opposition alliance after being detained by police at a rally against nationalist prime minister Viktor Orbán.

He has a particular reason to note Ms Donath’s growing profile: she is the granddaughter of Ferenc Donath, a prominent figure in Hungary’s doomed 1956 anti-Soviet uprising, which Mr Orbán is trying to reinterpret as part of his grand remaking of the nation.

The spark for the current protests was the introduction this month of what critics call the “slave law”, which obliges Hungarian employees to work up to 400 hours of annual overtime and wait up to three years for payment.

Thousands have marched through a freezing Budapest to demand abolition of the law, while also calling for fully independent courts and free media and for Hungary to join the EU prosecutor’s office to allow outside investigation of state corruption.

Mr Orbán has faced other protests since taking power in 2010, but this is the first time that those opposing him have ranged from Jobbik party nationalists to Socialists and Greens, via centrists such as Momentum and liberal NGOs, with support from students and trade unions.

“When the ‘slave law’ was passed, opposition parties did what they hadn’t done before. They finally worked together and really made their voice heard,” Ms Donath said at Momentum’s Budapest headquarters.

“For me, the government’s court reforms might be more dangerous – because now it’s impossible to say there is rule of law in Hungary – but it’s a more complicated issue. The ‘slave law’ is simple to understand and affects everyone.”

After the police released me he said: ‘You stood up for what you believe in – that’s what we do in this family'

Recent anti-Orbán protests in cities outside Budapest, while relatively small, are another new factor fuelling plans for nationwide demonstrations in the new year.

“We have all agreed in early January to make a huge protest across Hungary, to show that this is not a ‘Budapest-only’ issue,” said Ms Donath.

“The unions can really help by combining it with strikes, and with road blockades as well we can kill the life in Hungary, at least for one day. That will send a sign, and it has never happened before” under Mr Orbán, she added.

The EU is suing Hungary over its hardline policies against migrants and NGOs, and education reform that has forced the renowned Soros-funded Central European University to move most courses from Budapest to Vienna.

Mr Orbán insists he is simply fulfilling his mandate from a landslide re-election in April and says the overtime changes give more flexibility to willing workers.

Confident that the European People’s Party will shield him at least until next May’s European parliamentary elections, he continues to tighten government control over the law courts and media in Hungary, ignoring EU concerns for his country’s democracy and rule of law.

Ms Donath switched from civil society to Momentum to have a better chance of stopping Mr Orbán, but politics is also a family tradition.

Her father, Laszlo Donath, is a Lutheran pastor who from 1994-2010 served as a deputy on the Socialists’ benches, without becoming a party member.

He was just one year old in 1956, when the liberal reforms of Hungarian communist leader Imre Nagy were crushed by a Soviet invasion that claimed more than 2,500 lives and prompted some 200,000 people to flee the country.

Ferenc Donath, Laszlo’s father, was a member of Nagy’s inner circle, all of whom were seized with their families and taken to Romania after the Red Army-led invasion; Nagy was later sent back to Budapest and hanged, while Ferenc and his colleagues were given long sentences in Hungarian jails.

“After what he went through, I’m no one to complain about eight hours in detention,” Ms Donath said of her arrest for lighting a flare outside parliament. “Politics divides most families, but it brings us closer,” she added, while noting that she did not share the ideological views of her forebears.

“Now I think he’s the proudest father in world. After the police released me he said: ‘You stood up for what you believe in – that’s what we do in this family.’ ”

Mr Orbán made his political breakthrough with a speech at the 1989 reburial of Nagy in Budapest, but now he and his allies play down the role of the 1956 leaders, who sought liberal reform within a communist framework.

The government plans to remove a popular statue of Nagy from beside parliament, while reportedly preparing to transfer Mr Orbán’s office to the castle complex overlooking Budapest, where Hungary’s president has his seat.

Opinion polls show Mr Orbán’s Fidesz party is still dominant, but critics wonder if his perceived arrogance could get the better of him.

“The absolute goal [of the protests] would be to demolish this system and have a new election, even if takes a revolution to do it, and to start to go back to the democratic way of building this country,” said Ms Donath.

“After ruling for so many years I wouldn’t be surprised if they made a mistake - and one mistake for this crowd, with this anger, would be enough.”