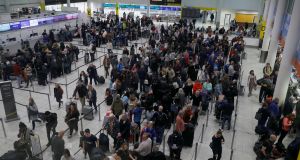 A man and a woman arrested over the disruption caused by drones at Gatwick Airport have been released without charge.

Sussex Police said both the man (47) and woman (54) had co-operated fully and were no longer suspects in the case.

It comes as the airport offered a £50,000 (€55,600) reward through Crimestoppers for information leading to the arrest and conviction of those responsible for the chaos.

Around 1,000 flights were cancelled or diverted after drones were spotted inside the perimeter of the United Kingdom’s second-biggest airport on Wednesday, and approximately 140,000 passengers were affected.

Police searched a house in Crawley on Saturday as the pair were held on suspicion of “disrupting services of civil aviation aerodrome to endanger or likely to endanger safety of operations or persons”.

Labour has called for an independent inquiry after accusing the government of failing to act on the risks posed by drones at Gatwick.

Shadow transport secretary Andy McDonald claimed there were missed opportunities to prevent the airport from coming under such an attack.

“The delay in bringing forward legislation is indicative of this government’s failure to concentrate on the day-to-day business in front of them. They have taken their eye off the ball,” he said.

On Saturday, the Times reported that Transport Secretary Chris Grayling had shelved plans to introduce legislation amid pressure on his department, with civil servants being diverted to prepare for Brexit.

But a Department for Transport spokesman said the claims were “a combination of nonsense and gross misrepresentation”.

He added: “The drones at Gatwick have been flown illegally. The Government changed the law this year to make it illegal to fly drones within 1,000 metres of an airport or above 400 feet. The law couldn’t be any more clear.” – PA

Coronavirus: France, Spain and UK suffer highest daily death tolls 20:25
Coronavirus: Ugandans prepare for a new war as clampdown takes hold 19:28
Coronavirus: British government admits it must ramp up testing 19:09
Belarusian leader prescribes sport, sauna and vodka to beat Covid-19 17:32
Irish in Peru: ‘There are people still stuck here and they need not to forget about us’ 08:25