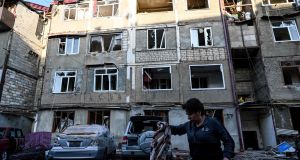 Nagorno-Karabakh said on Saturday that 51 more servicemen had been killed in the war with Azerbaijan, a sharp rise in the death toll resulting from a week of fierce fighting.

Arayik Harutyunyan, president of the ethnic Armenian enclave inside Azerbaijan, said earlier he had travelled to join his forces on the front line.

Heavy fighting between Armenia and Azerbaijan has continued in the conflict over the separatist territory, while Azerbaijan’s president criticised the international mediators who have tried for decades to resolve the dispute.

Fighting that started on September 27th is the worst to afflict the separatist area and surrounding territories since the 1994 end of a war that left the region in Azerbaijan under the control of ethnic Armenian forces, backed by Armenia.

Shushan Stepanian, a spokeswoman for the Armenian defence ministry, told the Associated Press that “intensive fighting is taking place along the entire front line”, and claimed Armenian forces had shot down three planes.

The leaders of Azerbaijan and Armenia set seemingly impossible terms for agreeing to calls from the leaders of the US, France and Russia for a ceasefire. “Cease-fire ok, but on what conditions? Conditions must be that they withdraw from the territories,” Azerbaijan’s President Ilham Aliyev said in a website statement, referring to Armenian forces. “We heard it many times, we don’t have time to wait another 30 years. The conflict must be resolved now.”

Armenian prime minister Nikol Pashinyan said Armenia is ready to accept a truce but only if Turkish forces leave the area, AFP reported. Ankara backs Azerbaijan but denies it has any military presence there.

Azerbaijan’s defence ministry did not respond to the claim of planes being shot down, but said Armenian forces had shelled civilian territory within Azerbaijan, including the city of Terter.

Nagorno-Karabakh was a designated autonomous region within Azerbaijan during the Soviet era. It claimed independence from Azerbaijan in 1991, about three months before the Soviet Union’s collapse.

Full-scale war that broke out in 1992 killed an estimated 30,000 people. By the time it ended in 1994, Armenian forces not only held Nagorno-Karabakh but substantial areas outside the territory’s formal borders.

Several United Nations Security Council resolutions have called for withdrawal from those areas, which the Armenian forces have disregarded.

Mr Aliyev said in a television interview that the forces must withdraw from those areas before fighting can stop.

In the interview with al-Jazeera, a transcript of which was distributed on Saturday by the presidential press office, Mr Aliyev criticised the so-called Minsk Group of the Organisation for Security and Co-operation in Europe, which has tried to mediate a resolution of the dispute.

One of the reasons behind the current fighting is that “the mediators do not insist or exert pressure to start implementing the resolutions of the United Nations Security Council”, he said.

“We have no time to wait another 30 years. The conflict must be resolved now.” – Agencies