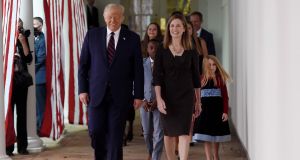 US president Donald Trump has previously appointed Judge Amy Coney Barrett to the US court of appeals for the seventh circuit, Chicago, in 2017. Photograph: Getty

The US Senate will begin confirmation hearings to approve the new supreme court justice nominee on October 12th, after President Donald Trump named Amy Coney Barrett as his choice to replace the late Ruth Bader Ginsburg on the court.

Chairman of the Senate Judiciary Committee Lindsey Graham said the Republican-controlled committee will vote on her nomination on October 22nd. It will then go to the full Senate for a vote, which is likely to take place in the final week before the November 3rd presidential election.

Mr Trump announced the 48-year-old judge as his choice to replace Ginsburg at a ceremony in the White House Rose Garden on Saturday, paving the way for what promises to be a contentious confirmation hearing amid the election campaign.

Ms Barrett, who was previously appointed to the US court of appeals for the seventh circuit in Chicago by Mr Trump in 2017, will become the fifth woman appointed to the court if she is approved as expected by the Republican-led Senate. He had considered her as a replacement for Judge Anthony Kennedy who retired in 2018, but instead opted for Brett Kavanaugh.

Mr Trump described Ms Coney Barrett as “one of our nation’s most brilliant and gifted legal minds . . . a woman of unparalleled achievement, towering intellect, sterling credentials and unyielding loyalty to the constitution”.

“I stand before you today to fulfil one of my highest and important duties under the United States constitution – the nomination of the supreme court justice.” Noting that he had now appointed three supreme court judges, he said it was “a very proud moment indeed”.

“Amy Coney Barrett will decide cases based on the text of the constitution as written . . . her qualifications are unsurpassed and her record is beyond reproach. This should be a straightforward and prompt confirmation,” said Mr Trump.

He appealed to Democratic senators “to provide her with the respectful and dignified hearing she deserves, and frankly the country deserves,”. He added that the media should refrain from personal attacks.

Ms Barrett said she was “deeply honoured” by the confidence Mr Trump has placed in her.

“I fully understand that this is a momentous decision for a president,” she said. And Ms Coney Barrett added that, if confirmed, “I pledge to discharge the responsibilities of this job to the very best of my abilities. I love the United States and I love the United States constitution. I am truly humbled by the prospect of serving on the supreme court.”

Ms Barrett said she will be “mindful of who came before me” if confirmed, paying tribute to Ginsburg, who she said had not only broken glass ceilings but “smashed” them.

“Judges are not policymakers and must be resolute on putting aside any policy views they hold,” she said.

The new supreme court nominee, a native of Louisiana, is a mother of seven, including two children she adopted from Haiti. She clerked for the late supreme court judge Antonin Scalia, before joining the law faculty at the University of Notre Dame.

She is a devout Catholic and has been a favourite of anti-abortion conservatives who hope that a conservative majority on the bench will eventually result in a challenge to the 1973 Roe v Wade ruling that introduced the right to abortion.

Her links to People of Praise, a charismatic Christian organisation in South Bend, Indiana, has come under scrutiny.

Ms Barrett was pressed on her religious views, and whether they would influence her job as a judge, during her confirmation hearing for the appeals court vacancy in 2017. She told senators her faith would not affect her decisions as an appellate judge.

If confirmed, her appointment to the bench will shift the ideological bent of the court to the right given that she will be replacing leading liberal jurist Ginsburg.

Senate Republicans have indicated they will press ahead with a confirmation hearing so close to an election, despite blocking former president Barack Obama’s nominee to replace Scalia in 2016 because it was an election year.

With a 53-47 majority in the chamber, senate majority leader Mitch McConnell appears to have enough votes necessary to confirm the nominee.

What does Joe Biden say?

“This defies every precedent, every expectation in a nation where the people, the people are sovereign and the rule of law reigns,” he said during a speech in Delaware.

In particular, he focused on the threat that a conservative-led court could pose to the Affordable Care Act, the healthcare policy also known as Obamacare.

He said that the Trump administration “see an opportunity to overturn the Affordable Care Act on their way out the door”, noting that “as I speak we are still in the midst of the worst global health crisis in a century”.

Nomination of the supreme court judge comes as a new Siena College-New York Times poll found that 56 per cent of respondents said they believe the winner of November’s election should pick Ginsburg’s replacement.

Several other polls released on Sunday show Mr Biden ahead of Mr Trump nationally and in key swing states. They were published ahead of the first presidential debate which takes place on Tuesday in Cleveland, Ohio.