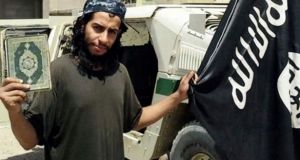 Presumed mastermind behind the Paris attacks Abdelhamid Abaaoud was said by prosecutors to have chaired a meeting the whereabouts of which were known to Redouane S. Photograph: AP

A Moroccan man has been arrested in Germany and charged with being a member of the Islamic State cell that carried out deadly attacks in Paris last year, the Federal Prosecutor’s Office said on Wednesday.

Redouane S was detained in Lower Saxony on Tuesday, prosecutors said. By convention, suspects in Germany are identified by the first name and initial.

The 24-year-old man was accused of renting flats in Turkey and Greece between October 2014 and Spring 2015 that were used by cell members to plan the attacks.

Prosecutors said he knew about a meeting of cell members in Verviers, Belgium on January 15th, 2015, where Abdelhamid Abaaoud, a main co-ordinator of the attacks, chaired a meeting to plan the attacks in Paris on November 13th last year.

“Even after his return to Germany in May 2015 he was in contact with the group led by Abaaoud and showed readiness to take more orders,” they wrote.