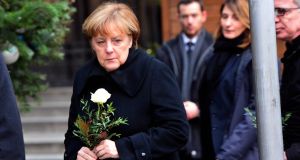 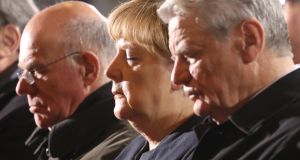 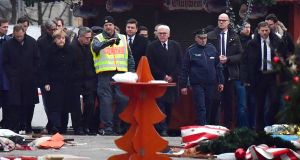 German police have admitted they are not sure who carried out the Monday evening attack on a Berlin Christmas market that killed 12, after releasing their only suspect on Tuesday evening.

A day after a 40-tonne lorry ploughed into a western Berlin market just after 8pm, injuring 48 people, police released without charge a 23-year-old Pakistani man, identified only as Naved B.

“We need to work on the assumption that an armed perpetrator is still on the loose. As a result of this, we are on high alert,” said Holger Münch, head of Germany’s federal criminal police force.

German federal interior minister Thomas de Maizière said he was “not without optimism that we will soon have progress in this investigation”.

“We cannot fall for the terrorists’ game by freezing up in fear,” he said.

The Islamic State terrorist group claimed responsibility for the attack last night. “The executor of the operation . . . in Berlin is a soldier of the Islamic State and he executed the operation in response to calls to target nationals of the coalition countries,” the militant group’s Amaq news agency said.

The 23-year-old asylum seeker who was released on Tuesday had been arrested two kilometres from the attack scene on Monday evening on western Berlin’s Breitscheidplatz, near the zoo.

The man protested his innocence and investigators said tests showed no traces on his hands or clothes of the gun used to shoot a 37-year-old Polish man, Lukasz Urban, who was found dead in the truck cabin after the attack.

A man called Abdul Waheed Baloch, who claimed to be a cousin of the arrested man, told ZDF public television: “Naved was with me the whole time, then suddenly his name came up but Naved is innocent.”

In a sombre television address, chancellor Angela Merkel admitted she had no easy answers for Germans after what she said appeared to be a terrorist attack.

“Even if it is difficult at a time like this, we will find the strength to live the life we want to live in Germany: free, united and open,” she said, after receiving messages of condolence and support from the leaders of the US, Russia and other countries.

US president-elect Donald Trump labelled the incident a “horrifying terror attack”. Mayor of Nice Philippe Pradal noted on Twitter there had been the “same blind violence, same hatred of happy people” in Berlin as in July’s Bastille Day truck attack that killed 86 in the French city.

Of the 12 victims of the attack, six were identified yesterday, all German nationals. Eyewitnesses spoke on Tuesday of seeing body parts strewn on the ground; others saw bodies trapped under the truck.

With flags flying at half-mast and all Christmas markets in the city closed, large crowds gathered on Breitscheidplatz on Tuesday evening to light candles and lay flowers as an ecumenical service took place inside the Kaiser Wilhelm memorial church.

“We stand together, mourning, as a society,” said Markus Dröge, Lutheran bishop of Berlin-Brandenburg. “But we will stand together.”