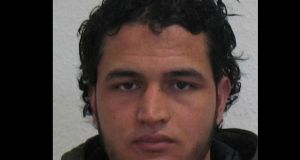 Anis Amri: Reward offered for infromation as to his whereabouts. Photograph: Reuters 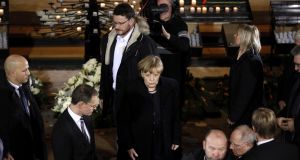 German chancellor Angela Merkel arrives at a church service at the church of remembrance at Breitscheidplatz where a lorry ploughed through a Christmas market killing 12. Photograph: Getty Images 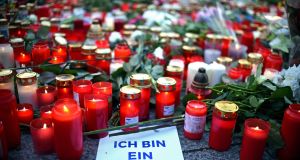 A tribute that reads “I am a Berliner” near the site of the attack at the Christmas market at Breitscheidplatz in the city. Photograph: EPA 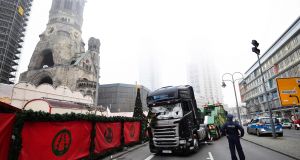 The truck used in the attack is towed away as forensic experts examine the scene. Photograph: Getty Images

Anis Amri who is the chief suspect in the Berlin Christmas market attack left Tunisia seven years ago as an illegal emigrant and spent time in prison in Italy, his father and security sources told Tunisia’s Radio Mosaique on Wednesday.

German authorities say the suspect was under covert surveillance for several months this year to determine whether he had planned a robbery to fund the purchase of automatic weapons for a possible attack with accomplices, according to a judicial source in Berlin.

The source, confirming an online report by the mass-selling Bild newspaper, said authorities stopped their monitoring activities after they could not prove the suspicions.

Bild said Amri was monitored between March and September. The source declined to specify the observation period.

Radio Mosaique reported that Amri is from Oueslatia in rural central Tunisia. He served four years in an Italian jail on charge of burning down a school, it said. The father told the radio station that his son had left for Germany a year ago.

A Tunisian interior ministry spokesman did not immediately return a call seeking confirmation of the radio report.

The attack is the deadliest on German soil since 1980. Twelve people were killed.

Mosaique said the suspect had also been accused of violent robbery in Tunisia. Amri (24) had contact with his brothers, but not his father, it said. Authorities were questioning the father about possible links to Islamic State, said the radio station, citing security sources.

Oueslatia, near the historic religious city of Kairoaun, is like many poor, rural Tunisian towns where unemployment is high and opportunities scarce for young men. Several families there have lost sons who joined jihadist groups in Iraq, Syria and Libya.

Meanwhile, Germany on Wednesday offered a reward of €100,000 for information leading to the arrest of Tunisian Anis Amri (24) who is suspected of involvement in the Berlin truck attack. Authorities also reiterated their warning that he could be armed and dangerous.

The Federal Prosecutor’s Office (GBA) said a search for Amri was ongoing, with support from police forces in all of Germany’s 16 federal states.

Germany has also confirmed a Europe-wide manhunt for him.

Two days after the attack that killed 12 and injured almost 50 more, the ongoing search divided government and opposition parties in Berlin.

The fresh investigation was launched after a wallet was found under the driver seat of the truck used in Monday’s attack. It contained a “toleration document”, an identity paper issued to someone whom German authorities have refused asylum but agreed not to deport; for instance if their homeland is a war zone. The document is made out to someone identified only as Anis A, born in 1992 in the Tunisian city of Tataouine.

Associated Press says it has seen the European arrest warrant from Germany, which names the suspect as Anis Amri.

“I would point out it is a suspect not necessarily the perpetrator,” said federal interior minister Thomas de Maizière. “The investigation is continuing in all directions, all clues are being followed up.”

He confirmed the European manhunt but, a day after a first suspect was released, the minister declined to comment on details and speculation circulating in the media.

“The result is what counts, not speed or speculation,” he said.

However police sources and regional politicians confirmed many of the details circulating about Amri.

He arrived in Berlin in July 2015 and appears to have sought asylum in several German cities in western Germany and in Berlin, where he was based in the last months. He claimed to be variously 21 and 23 and used several names including Ahmad Z and Mohamed H, originally from Egypt or Lebanon.

Since February of this year Amri’s file notes a possible link to the so-called Islamic State, subsequently upgraded him to a “dangerous person” capable of carrying out an attack who should be regularly monitored.

After an assault conviction during the summer, a court ordered him to be deported, after which he vanished.

“He couldn’t be deported because had no valid ID,” said state interior minister in North Rhine-Westphalia Ralf Jäger. He said Tunisia disputed the man was a citizen and refused to issue papers. “They were not issued for a long time but arrived today.”

That a man with Islamic State links went underground to avoid deportation sparked an energetic round of the blame game in Berlin on Wednesday afternoon.

Angela Merkel’s Bavarian CSU allies, long-time critics of the chancellor’s liberal refugee policy, said it was “perplexing” that someone with extremist potential and Isis links had been “tolerated” instead of deported immediately. It noted that the market massacre suspect illustrates the need to step up measures for expedited asylum and deportation procedures, including the use of transit and deportation camps.

“It would be wrong to make our chancellor responsible for this terrible, unfathomable attack from Monday,” said Stephan Mayer, CSU interior spokesman. But he said it would be “just as wrong” to say her refugee policies had nothing to do with the increased Islamist terror risk. “There is a link between the refugee crisis and the increased terror danger exemplified in this person.”

The opposition Left Party let fly at the CSU for those remarks, accusing the Bavarians of aping the right-wing extremist Alternative für Deutschland (AfD) by exploiting public emotion for political gain.

“I find it strange to project the acts of an individual on to an entire group,” said Frank Tempel, Left Party interior spokesman.

The Green Party agreed, attacking as “nonsense” attempts by the CSU to link the Christmas market attack to its demands for more energetic deportation rules.

“We’d do the security services a service not to instrumentalise the situation,” said Konstantin von Notz, Green Party interior spokesman in the Bundestag.

Caught in the crossfire between opposition and their Bavarian allies, CDU political spokesman Clemens Binninger attacked his Social Democrat (SPD) grand coalition partner. The CDU agreed with Bavarian demands to speed up asylum and deportation procedures, said Mr Binninger. If it were not for SPD opposition these measures would have been in place and the chief suspect in the Berlin market massacre would not be in Germany.

“This is a practical case . . . why we believe that in asylum politics a good welcome culture requires a consequential deportation culture,” said Mr Binninger.