German Chancellor Angela Merkel says that her country must assume that the Berlin Christmas market incident was a terrorist attack. Video: Reuters

German chancellor Angela Merkel: “No matter how this turns out, there is no good outcome for Merkel.” Photograph: Michael Kappeler/EPA

Dressed in black and wearing a bleak expression, Angela Merkel had her darkest day on Tuesday, a day before the winter solstice.

As millions of Germans struggled to grasp what had happened on Monday evening at a Berlin Christmas market, Merkel said she had no easy answers.

At 8.01pm on Monday it was a cheery oasis in the grey Berlin winter, a place of blinking lights, cheesy music and mulled wine. A place like thousands of others in Germany, markets where Germans celebrate life, Merkel said.

At 8.02pm the market in western Berlin was transformed into a place of terror, death and awful silence after a black articulated lorry veered off the road, sliced through flimsy wooden huts and crushed market-goers before juddering to a halt before a Christmas tree.

There was a dozen dead, four times as many injured and more questions than answers as the sun refused to rise over the freezing German capital on Tuesday.

The Kaiser Wilhelm Memorial Church, its ruined tower’s jagged outline a permanent memorial to a terrible war and a hard-won peace, now had another memory of senseless death and destruction to bear.

On Tuesday morning, even before the identities of the dead were known, pastors in the Lutheran church opened a book of condolence in the octagonal, post-war church built beside the ruin.

In the afternoon an ashen-faced Merkel, Germany’s most famous pastor’s daughter, laid a wreath and inspected the site of the tragedy. 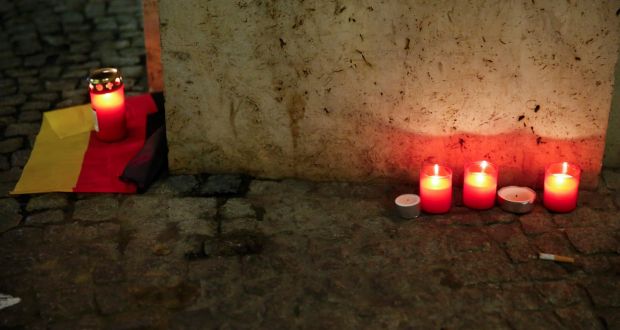 Rumours swirled around the German leader’s visit. Was this a copy of the July 14th attack in Nice, ordered by the so-called Islamic State? Or the act of a lone, crazed wolf?

There were only two certainties on Tuesday morning. First, after a few minor attacks and many, many lucky escapes, Germans has finally been hit badly and now feared for the worst. Second, no matter how this turns out, there is no good outcome for Merkel.

That was reflected in her tortuous, conditional-tense press statement. How particularly terrible the attack would be, she said, if the perpetrator were an asylum seeker who sought protection in Germany. If the asylum seeker still in custody as she spoke was linked to the attack, she would lose. His release, meaning the perpetrator was still at large, means Merkel loses again.

Merkel will need all her skill to steer a calm course in the coming days: offering comfort while urging caution yesterday, acknowledging public insecurity towards a refugee policy she sanctioned while insisting that the hateful acts of an individual cannot condemn a an entire group.

However, in these hours of fear and uncertainty, with Berlin joining Paris, Brussels, Nice and other cities touched by tragedy, the chancellor is already facing unprecedented pressure from her ruling Christian Democratic Union (CDU).

Two weeks ago Dr Merkel bowed to pressure from CDU conservatives and adopted a tougher line on refugees and deportations. A year after Germany threw open its borders to 890,000 asylum seekers from Syria, Afghanistan and northern Africa, CDU conservatives and Merkel’s Bavarian allies warned that Germany was now facing incalculable risks.

Acknowledging their concerns, Merkel pivoted right at the CDU party conference, realising that a refusal to do so risked exacerbating a drift of fearful voters to the far-right ahead of next September’s election.

After the initial shock passes and Germany enters the election cycle, that partial pivot may have to become a full political sea change, washing away the “we’ll manage this” Merkel of 2015 and, with that, the only western leader prepared accept his or her country’s share of the refugee crisis burden.

For years, Merkel has remained firm but fair. She condemned scores of sexual assaults at Cologne’s New Year celebrations and a series of attacks in Bavaria over the summer, all of which had some asylum seeker involvement. But her appeals not to conflate individual asylum crimes with the entire asylum population is wearing thin with many Germans as the year ends with another series of horrifying crimes.

A young Afghan man is accused of raping and murdering a 19-year-old woman in Freiburg, near the Black Forest. This week Germans were perplexed and horrified by news of a foiled attack on a Christmas market in southwestern Ludwigshafen by a 12-year-old German-Iraqi boy.

Far less reported, of course, are the by now daily attacks on asylum seekers and refugee homes, particularly in Germany’s east. But in the seething, post-factual social media cesspool, where every crime carried out by an asylum seeker or refugee is multiplied by many more fictional incidents, Christmas has come early for the far-right Alternative für Deutschland (AfD).

Days after agreeing a programme of “targeted provocation” to maximise support in next September’s federal elections, senior AfD leader Marcus Pretzell wasted no time putting theory into practice on Monday night. Just an hour after the attacks, he tweeted that the Berlin victims were “Merkel’s dead” – and was promptly told by others to “shut your brown mouth”.

Merkel is on the defensive as she heads off for Christmas and into an uncertain new year, her already complicated fourth term election bid in 2017 now considerably more difficult.

Breda O’Brien: Leaving Cert lessons to be learned from the pandemic

The Irish Times view on the reopening: a desire for a cautious restart

Breda O’Brien: Leaving Cert lessons to be learned from the pandemic

Diarmaid Ferriter: There is a difference between history and memories

4 Why does the small TUV party frighten the DUP so much?