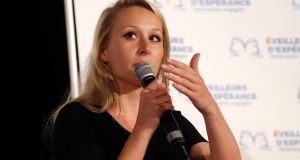 Marion Maréchal, the 29-year-old heir apparent of the French far-right, says she is playing a long game.

The politician and niece of Rassemblement National (RN) leader Marine Le Pen relinquished her parliamentary seat two years ago and has since then become an enthusiastic recruiter for her aunt, whose nationalist and anti-immigrant politics remain toxic for centrist voters.

With no plans to run for election herself in the “medium to long term”, Maréchal is focused on reshaping politics by building a “grand coalition” of the right, she told the Financial Times in an interview. In the wake of the poor performance by the French centre right in May elections, she said: “I think the debacle of Les Républicains is an opportunity to look at reconstructing the French right.”

“I don’t think at all that the LR party is going to come over to the RN party. Not formally,” she said. “But either the LR finishes by dying, by splitting, or a new political force will emerge.”

Maréchal remains a hugely polarising figure. Last week, she was invited and then rapidly disinvited to speak about populism at the annual conference of France’s largest employer federation – a decision that demonstrated that France does not “tolerate freedom of expression”, she said.

Her current project, a fledgling school in Lyon for the far-right aimed at training students for leadership positions, drew fire after Steve Bannon, the ex-Trump adviser pushing for a pan-European populist movement, was claimed to be an informal adviser – although Maréchal now says he has “no role at this school”.

And last month she caused uproar among the battered Les Républicains – who took just 8.48 per cent of the vote in May’s European parliamentary elections – by dining with the centre-right party’s politicians in an effort to woo disillusioned centrists to her aunt’s cause.

“I consider that [those who met Maréchal] have set themselves apart from the values of our political party,” said Gérard Larcher, speaker of the Senate.

“They act like we have broken a cordon sanitaire ... it suggests we are germs,” said Maréchal. “I want to talk to the many French people who today have backed away from politics because they don’t feel represented by [president Emmanuel Macron’s] En Marche or by LR, who represent for me today the orphaned right.”

Maréchal, who was the RN’s youngest National Assembly member until she stood down in 2017 after Le Pen lost the second round of the French presidential election to Emmanuel Macron, clearly still has support.

“Polls show that 30 per cent of French voters want her to come back to politics, 70 per cent of RN voters too but also a half of LR voters,” said Jerome Fourquet, head of political surveys at Ifop. “It was only 35 to 40 per cent of LR voters one year ago.”

Analysts say her strategy of reaching out to LR voters is unlikely to succeed but that it could allow the RN to pick up allies and votes.

To this end, Maréchal said, she was acting as “an intermediary” for the right, a way for the RN to reach those attracted by the far-right platform but wary of Le Pen, said Mr Fourquet.

Le Pen remains taboo for many voters despite her strong showing in the 2017 presidential election and her attempts to shake off the party’s demons, including by changing its name from Front National last year. That move mirrored Maréchal’s decision to drop the Le Pen name.

For now, one of Maréchal’s biggest advantages is “she is known but not too well known and she is smart enough to know that she doesn’t have to go too fast”, said Pascale Joannin, who heads the Robert Schuman Foundation think-tank.

She is “harder than her aunt on immigration and identity”, said Fourquet, and, according to Joannin, “could end up more dangerous”.

Maréchal’s drive to curb immigration rests as much as possible on economic arguments, but she believes French culture is not being defended. “There is an ethno-masochistic mentality ... in the schools of the French republic,” she said.

France has shown “an incredible naivety” in terms of international trade and mergers, particularly on a European level, and should use the euro to push back against the US, she said. “The one thing [the euro] gives us is the ability to confront the dollar and the tendency for the US to make its laws count extraterritorially,” she said.

While many on the right await her official return to frontline politics, it seems unlikely to happen before the next presidential election. “Now is the time for Marine to build her support,” said Jean-Yves Camus, a political scientist.

Analysts expect Le Pen to have one more go at taking on Macron in 2022, and Maréchal has no appetite for a direct confrontation with her aunt.

“I have seen politics destroy my family through the generations. I think it would be personally and politically disastrous,” she said. “So I will play a role. But to put myself on the political stage against Marine Le Pen? No, never.” – Copyright The Financial Times Limited 2019