Brexit fact check: From £350m for the NHS to no turning back

Neither side stuck to hard facts during the UK referendum campaign 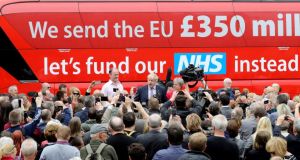 £350m a week for the NHS: Boris Johnson’s claim was founded on some pretty shaky maths. Photograph: Christopher Furlong/Getty

Claim made by: Vote Leave
The most controversial pro-Brexit slogan was paraded on the side of the Vote Leave campaign’s battle bus in the run-up to the referendum of June 23rd, 2016. The £350 million figure was founded on some pretty shaky maths. The number comes from the UK treasury’s European Union Finances 2015 report, which shows the country’s gross contribution as £17.8 billion a year, or £342.3 million a week.

But this figure does not take into account the United Kingdom’s rebate, negotiated in 1985 by Margaret Thatcher. Broadly, the UK gets back 66 per cent of the difference between its share of member states’ VAT contributions and its share of EU spending. The 2015 rebate was £4.9 billion, meaning the net bill for the UK was £12.9 billion, or less than £250 million a week.

Claim made by: George Osborne
George Osborne based his claim, which he made when he was the British chancellor, on UK treasury research that forecast a 6 per cent shrinkage of the UK economy by 2030; he said this would cost each household £4,300. But this claim is based on the conflation of two very different things: GDP per household and household income. What the treasury report suggested was that there would be a drop in GDP per household after the Brexit vote. Although the GDP drop does affect household income, its impact is not uniform and does not amount to a decrease in household income. In fact, incomes are projected to rise.

Recent figures from the UK Office for National Statistics show that there has been a squeeze in disposable household income because of inflation, which is linked to the fall in value of the pound since last year’s vote, but there are questions about the accuracy of the economic modelling. It is incredibly hard to predict with such accuracy the impact a decision will have on the British economy in a decade’s time.

Claim made by: Theresa May
The British prime minister’s refrain since the Brexit referendum is not quite what it seems. Experts have queried the practicalities of a no-deal scenario. For one thing, researchers at the London School of Economics say that leaving the European Union will require the renegotiation of more than 100 treaties.

If the UK were to exit without a deal with the EU, then trade would fall back to World Trade Organisation rules. The EU accounts for about 53 per cent of UK imports and 48 per cent of UK exports; exporters would face tariffs and no longer benefit from automatic recognition of EU product standards, leading to more potential costs. And tariffs are not applied evenly. In 2015 the average tariff on agricultural products was 10.7 per cent, compared with 4.2 per cent for nonagricultural goods.

Air travel, emergency healthcare in the EU, the status of EU nationals and expats, the Irish Border and financial services – so-called passporting – could also be among the issues unresolved in a hard Brexit.

Claim made by: Theresa May
It is clear that neither the UK government nor the opposition Labour Party has any appetite for reversing the Brexit decision, but the question of whether the UK’s exit could be reversed remains open. The terms of article 50 are somewhat vague, which some EU academics believe could leave the door open for a change of heart.

John Kerr, the former British diplomat who drafted article 50, argues that it is reversible. This is supported by Donald Tusk, who said it could be “formally, legally” taken back. But the UK supreme-court judgment on article 50 accepted that the process was irrevocable, and the European Commission said article 50 “cannot be unilaterally reversed”. It is unclear, then, whether the UK could legally attempt to reverse article 50 – but there appears to be very little political will to do so.

Scotland could stay in the EU after the UK leaves

Claim made by: Scottish nationalists
This was a theory suggested by a number of Scottish nationalists immediately after the Brexit vote. Two-thirds of Scots voted to remain in the EU, and there was talk of a separate deal being negotiated within the UK or, if Scotland voted to leave the UK, perhaps continuing membership as an independent country.

Most constitutional and EU experts believe this is practically unlikely. There is no precedent for such a situation, and Scotland would have to separately fulfil the existing membership criteria. But it seems likely that an independent Scotland would be well placed to join the EU. One think tank said the country was well qualified for EU membership, and a former World Trade Organisation director said Scotland would have “zero technical problems” rejoining Europe.

The UK will create nearly 400,000 jobs in trade deals after Brexit

Claim made by: Change Britain pressure group
Reports of the impact of Brexit on employment abounded in the run-up to last year’s referendum. One such claim, from the pro-Brexit Change Britain group, was that the UK could create nearly £20 billion from extra exports and create 387,580 jobs from leaving the customs union.

The report uses figures from the European Commission in 2012 estimating that 16,700 jobs would be created for each €1 billion in exports to countries outside the EU, then dividing by the UK proportion of extra-EU exports – 15 per cent.

Prof Jonathan Portes of UK in a Changing Europe called the report’s figures “entirely fictional statistics” and said they ignored the risks of leaving. Sam Bowman of the neoliberal Adam Smith Institute also described the numbers as “basically junk”. He argued the report is wrong to assume the UK could by itself get the same trading terms with other countries and blocs as the much bigger European Union receives.

Claim made by: Vote Leave poster
Fears about immigration made up a significant part of the leave campaign’s strategy. Before the vote much was made of the application of Turkey to join the European Union, which would allow its population to move freely between and within member states.

The one problem with this claim? Turkey’s application to the EU has been ongoing since 1987 – and has stalled until the country fulfils a host of criteria that experts believe it is an extremely long way from reaching.

A 2017 referendum handed President Erdogan sweeping new powers that many EU experts believe will make Turkey’s accession bid even more unlikely to succeed. So although Turkey could join the European Union in the future, the likelihood of its being in the near future is minute.

Two-thirds of British laws are made in Brussels

First, the House of Commons library said in 2010 that there was “no totally accurate, rational or useful way of calculating the percentage of national laws based on or influenced by the EU”.

Estimates vary wildly, depending on the source, but UK government statistics put the figure at 13 per cent between 1992 and 2014. This does not take into account EU regulations that are legally binding without having to pass through national parliaments, so the figure is likely higher. But the Business for Britain report was described as “comparing apples with pears”, as it included both legislative EU regulations and nonlegislative ones.

Nonlegislative laws are large in number, as they are one of the main ways that EU institutions reach technical administrative decisions. Most of these “EU laws” have little or no impact on the UK.