A year after the Brexit vote, a new order takes shape

A year after the referendum, chaos reigns in London while the EU is on the rise 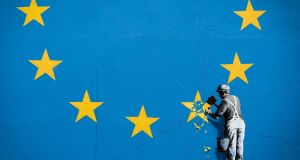 Taken with the risks of a reimposition of Border controls between the Republic and Northern Ireland, Brexit presents, in the eyes of the Government, the biggest threat to the island’s prospects in generations. Photograph: Bloomberg/Getty Images

On this day last year, British voters delivered a thunderbolt that resounded across Europe and beyond. Brexiteers were jubilant, Remainers crestfallen. But even among those partisans of a fraught debate, the overriding, unifying response was confusion. In an instant, the UK had turned its back on a pillar of its postwar diplomacy, casting itself adrift into uncharted waters. They had chosen Brexit, but what on earth did Brexit mean?

In those chaotic early days, two assumptions guided most assessments of the route ahead. First, that the British government, as a rational actor with clear sight of the potential of Brexit to cast it into the global periphery and damage the living standards of its people, would actively seek a deal that minimised the shock. Second, that the European Union was grievously, perhaps even fatally, undermined. By removing one of the EU’s biggest members, introducing a reverse gear to a project that defined itself by the principle of constant forward motion, Brexit would put in doubt the very viability of the ideal that animated continental politics since the trauma of the second World War.

Either or both of those assumptions could in theory yet turn out to be true, but all the evidence of the past 12 months suggests otherwise.

Far from rising to the moment and seeking primarily to safeguard British stability, the government in London has presided over a 12-month horror show. Led by Theresa May, a Remainer who reinvented herself as an ardent Brexiteer, it has staggered towards the negotiations while giving no impression that it has a coherent view on the sort of Brexit it wants or how it plans to get it.

May came to 10 Downing Street with a reputation for caution and prudence. Her actions are those of an adrenaline-chasing thrill-seeker. The talks between the UK and the EU formally began this week with the key contradiction at the heart of the British position unresolved: it repudiates key planks of EU membership, including the single market and the customs union, but wishes to retain the huge benefits that they provide to those who buy in.

That sense of British disarray grows more apparent with every passing month. A snap election designed to shore up May’s authority has instead diminished it, leaving her hostage to her party colleagues and the Democratic Unionist Party, which is busy extracting all it can get for its vital 10 votes at Westminster. What public discussion there is has been stymied by the fact that one centre of influence, the Labour Party, is reluctant on account of its own divisions to re-open the debate, while another, the anti-European right-wing press, is determined to shut it down.

And so the UK is about to enter one of the most consequential phases of its postwar history – one that will redraw its institutional make-up and reshape its global relationships – with weak leadership, a compliant opposition and muted discussion on what is at stake. Every time May repeats her tautological mantra, “Brexit means Brexit”, or Labour leader Jeremy Corbyn says that he wants a “Brexit for the many, not the few”, the effect is to add yet more tragi-comic layers to the story.

If the chaos in Britain has been surprising, just as striking has been cohesion on the EU side. The EU27 enter the talks projecting a sense of unity and serenity wholly at odds with the mood of stasis and rancour that hung over the bloc through the euro zone crisis.

The Republic is uniquely exposed to the Brexit fallout. If anything, assessments of the potential damage have worsened in the past year.

A year ago, the potential demise of the European project was a subject for discussion. Today the EU looks rejuvenated. Defeats for populists in France, Austria and the Netherlands have given centrists a new self-confidence.

With Angela Merkel looking well placed to win a fourth term as chancellor in September and France now led by Emmanuel Macron, a fervent pro-European with an unassailable parliamentary majority, the revival of the Franco-German axis could give the project an impetus that long seemed lost.

All of this takes place against an economically propitious backdrop. The British economy is showing signs of slowing down, but unemployment in the euro zone, while still at 9.5 per cent, is at its lowest since 2009, and growth has returned.

While Britain obsesses about Brexit, and will deal with little else for the next two years, the EU’s perspective already stretches beyond the UK’s departure. Merkel and Macron spoke in recent weeks of a “roadmap” on which both countries would set out by ceding ground on long-standing principles (structural reform for France, financial solidarity and defence co-operation for Germany).

That road would inevitably lead to greater integration and co-operation. We may also be seeing the emergence of a shift in power back towards the geographic heart of Europe. Successive enlargement rounds dispersed influence more widely, towards the east in particular, while the UK’s weight served as a brake on Franco-German dominance. Now, with the UK’s impending departure, an authoritarian drift in Poland and Hungary and the restoration of the Franco-German axis, that could well change.

Against that background, Ireland finds itself in a delicate position. The Republic is uniquely exposed to the Brexit fallout. If anything, assessments of the potential damage have worsened in the past year. The Central Bank estimates that it could lead to as many as 40,000 job losses – equivalent to 2 per cent of the labour force.

Even allowing for the compensatory rise in foreign direct investment as companies flee an isolated Britain, a hard Brexit, which left the UK outside the single market and the customs union and perhaps even without a trade deal with the EU, could be catastrophic for Irish farming and the economy in general. Taken with the risks of a reimposition of Border controls between the Republic and Northern Ireland, Brexit presents, in the eyes of the Government, the biggest threat to the island’s prospects in generations.

The best case Brexit for Dublin is one that looks and feels as close to the status quo as possible. But London’s posture means that, unless another British election throws up a surprise or Whitehall puts the outcome of the negotiations to a referendum and loses, a truly soft Brexit is a remote possibility.

So the Government finds itself having to press for the best deal for the UK while at the same time staying faithful to its partners in the EU27, who have every incentive not to reward the UK for leaving. All the while, the State must position itself for a future in the EU without its closest ally, seeking out fresh alliances and working to kindle new relationships.

Faced with these dilemmas, the Government has mobilised resources at home and abroad, beefing up key embassies and reorienting domestic efforts towards this single issue. Its focus to date has been to put Irish concerns at the centre of the Brexit discussions – with some success. All the key players – the European Commission, the Council, the European Parliament and the British – list the question of the Border and the integrity of the Belfast Agreement as priorities.

But the real tests await. The negotiations may have begun in good spirits in Brussels this week, but as the two sides begin to drill down into the knots the tone will inevitably turn sour, quite possibly nasty. Positions will be revised. Priorities will be ditched. Bleary-eyed negotiators will make ugly trade-offs in the middle of the night.

We can also expect the veneer of unity within the EU27 to fade as the talks progress. “We won’t always be as calm as measured as today,” commission president Jean-Claude Juncker said after the council adopted its negotiating guidelines with minimal fuss earlier this year.

That’s because the united front belies the widely divergent interests within the group. Some, including Ireland, Denmark and the Netherlands, are chiefly concerned about the impact on their strong trade links with the UK. Eastern European states with big emigré communities in Britain worry about freedom of movement and their citizens’ rights.

For the EU’s poorest countries, the loss of the €18 billion that the UK contributes to the budget arouses fears for the future of the structural funds, while for members on the EU’s eastern frontier, such as the Baltic states, security and defence are high on the agenda. A point will come where these priorities seem incompatible. As with any negotiation, something will have to give.

If the Government is to succeed in keeping the Border invisible, upholding the Belfast Agreement, maintaining the Common Travel Area and minimising the economic shock, it will take every bit of guile, ingenuity and hard-nosed negotiating technique it can muster.