British prime minister Theresa May looks to reassure EU citizens currently living in the UK by saying, "No one will have to leave." Video: EU Commission 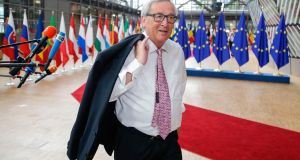 European Commission president Jean-Claude Juncker said this was a first step ‘but this step is not sufficient’. Photograph: Photograph: Getty

Jean-Claude Juncker, the president of the European commission, struck a dismissive note as he arrived at an EU leaders’ summit on Friday. “That is a first step but this step is not sufficient,” he said.

Asked whether he was any clearer about the kind of Brexit the UK wants, he was equally blunt: “No.”

Mrs May set out the offer on protecting EU citizens’ rights at the end of a dinner in Brussels on Thursday evening.

She said it was “a fair and serious offer to protect the rights of 3.5 million EU citizens in the UK and 1.2 million Britons in the EU.”

Both sides have said they would like the issue to be resolved early in the talks, but Mr Juncker’s comments indicate there is a large gap to bridge.

The Belgian prime minister, Charles Michel, called Mrs May’s proposals “particularly vague”, using a Flemish expression for a dubious gift. “We don’t want a cat in the bag,” he said. “We want the rights of EU citizens to be permanently guaranteed.”

The Dutch prime minister, Mark Rutte, said there were “thousands of questions to ask”, while the Austrian chancellor, Christian Kern, described the offer as “a first step” which did not cover the situations of many EU citizens in the UK.

Other leaders were more guarded. The German chancellor, Angela Merkel, said the proposals were “a good start”, but cautioned there were “many, many other issues” before Britain could reach agreement on its EU exit.

Mrs May acknowledged that elements of her plans would be challenged by the EU. “Of course, there will be details of this arrangement which will be part of the negotiation process,” she said as she arrived for a second day of talks.

“This is a fair and serious offer. I want to give those EU citizens in the UK certainty about the future of their lives, but I also want to see that certainty given to UK citizens who are living in the EU.”

The British government will publish a full proposal on Monday, but Mrs May gave leaders a short overview during a dinner dedicated to non-Brexit issues. She said the UK was willing to agree to a “cut-off point” between March 29th this year, when Mrs May formally triggered article 50, and the later date of March 2019 as preferred by the European commission.

EU citizens already in the UK - and those who arrive lawfully during a subsequent “grace period”, expected to be up to two years - will be given the opportunity to build up five years’ worth of residence. The grace period could start at any point up to the date of Brexit and would allow EU citizens time to regularise their status.

That would entitle them to a special category of “settled status”, conferring the same rights to work, pensions, NHS care and other public services as British citizens, which they will maintain for life.

The offer, which is contingent on a reciprocal pledge about the rights of British citizens currently living elsewhere in the EU, falls short of the EU’s demand for its citizens living in the UK to maintain all EU rights in perpetuity. But Mrs May told EU leaders that she did not want to see anyone already in the UK forced to leave, or families split up.