What is the Iran nuclear deal and why does Trump despise it? 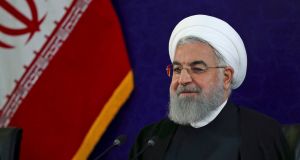 What is the Iran nuclear deal?

Iran and a six-nation negotiating group reached a landmark agreement known as the Joint Comprehensive Plan of Action in July 2015. It ended 12 years of deadlock over Tehran’s nuclear programme. Struck in Vienna after nearly two years of intensive talks, the deal limited the Iranian programme to reassure the rest of the world that it would be unable to develop nuclear weapons, in return for sanctions relief.

At its core, the JCPOA is a straightforward bargain. Iran’s acceptance of strict limits on its nuclear programme in return for an escape from the sanctions that grew up around its economy over a decade prior to the accord. Under the deal, Iran unplugged two-thirds of its centrifuges, shipped out 98 per cent of its enriched uranium and filled its plutonium production reactor with concrete.

Tehran also accepted extensive monitoring by the International Atomic Energy Agency (IAEA), which has verified 10 times since the agreement, and as recently as February, that Tehran has complied with its terms. In return, all nuclear-related sanctions were lifted in January 2016, reconnecting Iran to global markets.

Which countries are involved?

The six major powers involved in the nuclear talks with Iran were in a group known as the P5+1: the UN Security Council’s five permanent members – China, France, Russia, the UK and the US – and Germany. The nuclear deal is also enshrined in a UN Security Council resolution that incorporated it into international law. The 15 members of the council at the time unanimously endorsed the agreement.

Why does Donald Trump want to scrap it?

Donald Trump’s victory in the November 2016 US election put the fate of the deal in doubt. As Barack Obama’s signature foreign policy achievements, Trump promised before his election to “dismantle the disastrous deal with Iran”, although many believed he might instead adopt a more rigorous implementation of the agreement and tighten sanctions already in place. This could force Tehran to violate first or make the deal redundant.

In January, he reluctantly waived a raft of sanctions against Iran as required by Congress every 120 days, but said “this is a last chance” and asked “European countries to join with the United States in fixing significant flaws in the deal”. The congressional deadline Trump faces this time is May 12th, but he tweeted on Monday that he would announce his decision by Tuesday.

Trump believes the agreement is a bad deal, which falls short of addressing Iran’s regional behaviour or its missile programme. He is emboldened by a group of Iran hawks in his inner circle, such as the national security adviser, John Bolton, and the secretary of state, Mike Pompeo. Critics also say it is another example of Trump dismantling Obama’s achievements and legacy.

Why do others want to save it?

Except for the US, all other P5+1 negotiating partners want to keep the agreement. In the words of Boris Johnson, the UK foreign secretary, who has visited Washington DC to lobby Trump not to scuttle the agreement, “of all the options we have for ensuring that Iran never gets a nuclear weapon, this pact offers the fewest disadvantages”.

After the Israeli prime minister, Binyamin Netanyahu, unveiled a cache of documents that he claimed showed Iran was cheating on the agreement, European countries pushed back against this, saying the documents underlined the importance of keeping it. – Guardian