Migrants mass on Turkish-Greek border to try to enter EU 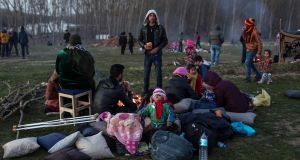 A group of migrants in Edirne wait to cross into Greece at the Turkish-Greek border. Photograph: Sedat Suna/EPA

Thousands of people have massed on the borders of Greece in the hopes of crossing into the European Union after Turkey declared it would no longer hold them back.

Clashes broke out at one border crossing at the weekend as Greek police fired tear gas to repel migrants who tried to force their way through.

The United Nation’s International Organisation for Migration said it had observed at least 13,000 people gathered at checkpoints into Greece and at numerous informal crossing points. At the same time, hundreds more people began landing from boats at the Greek islands close to the Turkish coasts.

People began moving towards the border in their thousands after Turkey announced it would no longer prevent them leaving.

“There have been about 10,000 or so migrants that have been coming on buses from Istanbul up to this area since yesterday,” said a spokeswoman for the UN’s International Organisation for Migration.

“Buses in Istanbul are still full and people are coming in the hundreds if not thousands.”

Families laden with bags and carrying small children could be seen trekking towards the border, some gathering firewood to survive the cold winter night.

It comes against a backdrop of worsening conflict in Syria, where a major escalation threatens between Turkey and Syrian ally Russia and has driven hundreds of thousands of people from their homes.

Almost a million people have fled the fighting and are living in makeshift encampments in Syria’s northwest, 80 per cent of them women and children, according to the UN.

In 2016, Turkey signed a deal with Brussels to stop such people crossing into the EU, in the wake of a migration crisis that saw one million people reach Europe.

But this weekend Turkish president Recep Tayyip Erdogan declared he would no longer stick to this accord, accusing the EU of not upholding its side of the deal in providing financial aid.

“What did we do yesterday? We opened the doors,” Mr Erdogan told parliament. “We will not close those doors . . . Why? Because the European Union should keep its promises.”

Turkey’s turnabout came after an air strike killed 33 Turkish soldiers in northwest Syria where Ankara has deployed forces in support of rebels and to help secure its border against a new influx of refugees from the Syrian civil war that has ground on since 2011.

Turkey has said funds promised by the EU to help it deal with 3.7 million Syrian refugees already in the country have been slow to arrive; Ankara had threatened several times in the past to open the floodgates if it did not receive more support.

The EU, its relations with Turkey tense over Mr Erdogan’s crackdown on dissent and hydrocarbon drilling off Cyprus, scrambled to respond to the new migrant crisis.

Officials at EU headquarters in Brussels called for emergency meetings of migration and foreign ministers to decide the next steps, while EU border agency Frontex said it was in talks with Greece to help it guard the bloc’s external frontier.

“Frontex is in close contact with Greek authorities regarding additional support we can provide,” the agency said. “We are redeploying equipment and additional officers to Greece and closely monitoring the situation.”