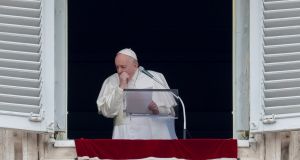 Pope Francis coughs during the Angelus noon prayer from the window of his studio overlooking St. Peter’s Square, at the Vatican on Sunday. Photograph: Andrew Medichini/PA

Pope Francis announced on Sunday that a cold he is suffering from has forced him to skip a Lenten spiritual retreat with senior Vatican officials near Rome for the first time in his papacy.

The surprise announcement, which will keep him from attending a gathering he holds dear, marked the first health scare for the 83-year-old pontiff since his election in 2013.

As of late Saturday night, the Vatican said that Francis would be taking part in the retreat, indicating that the decision to skip it was a last-minute one. The retreat was due to start on Sunday afternoon.

The pope made the announcement to thousands of people in St Peter’s Square during his first public appearance since last Wednesday, when he was seen coughing and sneezing.

“Unfortunately a cold will force me not take part this year (in the retreat). I will follow the meditations from here,” he said, departing from his prepared address.

Francis coughed several times while making his brief address on Sunday and sounded like he had a stuffy nose. Francis is missing a part of one lung. It was removed when he was in his early 20s in his native Buenos Aires after an illness.

The Vatican had previously said only that Francis was suffering from a “slight indisposition” that forced him to cancel most audiences in the past three days.

“I will unite myself spiritually with the (participants) and all people who are living moments of prayer. I will do the spiritual exercises from home,” he said.

The respected website Il Sismografo, which follows Church affairs, said it was the first time since 1950 that a pope has missed a Lenten retreat.

Home for the pope is Santa Marta, the Vatican guest house where he lives in simple quarters after opting not to use the spacious papal apartments in the Apostolic Palace.

The pope has been taken ill at a time when Italy is battling a surging outbreak of the potentially deadly coronavirus. His spokesman Matteo Bruni dismissed on Friday speculation that Francis was anything more than slightly unwell.

“There is no evidence that would lead to diagnosing anything but a mild indisposition,” he said.

A number of people in St Peter’s Square to hear the pope wore surgical face masks.

Italy has registered more than 1,100 confirmed cases of coronavirus since February 20th and at least 29 deaths - the worst such contagion in Europe.

After his election, Francis broke with the tradition of his predecessors, who held the retreats in the Vatican, and moved them to a Church property in the town of Arricia, south of Rome.

The cancellation was a personal setback for the pontiff, a member of the Jesuit religious order, which, like other groups in the Church, places great significance in holding retreats and spiritual exercises away from one’s normal workplace.

Some Lent Ash Wednesday services were cancelled or limited in areas of northern Italy hit by the spread of the virus.

The pope skipped a few events at the start of his papacy in 2013 and 2014 but the cause was believed to be of an intestinal nature.

Francis also suffers some leg pain due to sciatica, for which he undergoes regular physical therapy and which explains his occasional difficulty climbing steps.