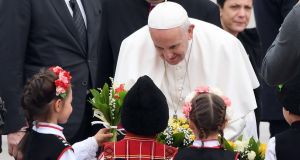 Pope Francis urged Bulgarians on Sunday to help migrants and refugees, as he arrived in a country that has been accused of mistreating people seeking protection and where nationalist, anti-immigration parties are in power.

During his three-day visit to Bulgaria and neighbouring North Macedonia, the pontiff intends to advocate for asylum seekers and for better relations between the Catholic Church and the Orthodox faith that is dominant in both Balkan states.

On arrival in Bulgaria, the poorest country in the European Union, the pope praised the hospitality of its people but also noted that it faces a mounting population crisis due to widespread emigration and a falling birth rate.

“To all Bulgarians, who are familiar with the drama of emigration, I respectfully suggest that you not close your eyes, your hearts or your hands – in accordance with your best tradition – to those who knock at your door,” he said.

The pope called on his hosts “to foster harmony and concord . . . by establishing vital links between different civilisations, sensibilities and traditions, and by rejecting every form of violence and coercion.”

He added: “In this way, those who seek by any means to manipulate and exploit religion will be defeated.”

Bulgaria has built a security fence along its frontier with Turkey to keep out refugees and migrants. And rights groups have accused its police and border guards of mistreating those who try to cross the country en route to western Europe; nationalist vigilantes have also been filmed detaining migrants near the border.

“I was happy to welcome a man who is a symbol of faith in our world,” said Mr Borisov after reportedly greeting the pontiff with a cup of Bulgarian yogurt, having heard that he enjoyed drinking it as a child in his native Argentina.

“Pope Francis’s prayers for peace are extremely important for our region, which stretches from Ukraine in the east to the western Balkans,” added Mr Borisov, who wants the EU to tighten its borders to deter refugees and migrants.

Pope Francis, who is the second pontiff to visit Bulgaria after John Paul II in 2002, also met the leader of the Bulgarian Orthodox Church, Patriarch Neophyte.

The Bulgarian church is seen as sympathetic to nationalist groups, supports a strong anti-immigration policy and has said its clerics will not join the pope for prayers or Mass during his visit.

Francis lamented the “bruises” left by the 1000 schism between Catholicism and Orthodoxy and expressed hopes that one day “we can celebrate . . . at one altar.”

Neophyte was less conciliatory, however: “The life of the church is governed by our Lord Jesus Christ. If God has allowed something to happen, he knows why he has allowed it and expects us to understand why. We, the Bulgarian Orthodox Church, are firmly convinced that in terms of faith, compromises cannot and should not exist.”