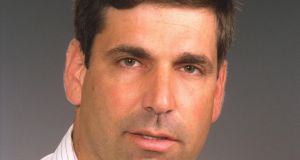 A former Israeli government minister, once imprisoned for trying to smuggle drugs, is back behind bars after being charged with spying for Iran, the country’s internal security agency said.

The Shin Bet said Gonen Segev was extradited from Guinea and arrested upon arrival in Israel last month on suspicion of “committing offences of assisting the enemy in war and spying against the state of Israel”.

It said Segev, a former energy minister, acted as an agent for Iranian intelligence and relayed information “connected to the energy market and security sites in Israel including buildings and officials in political and security organisations”.

Segev, who served in the Cabinet under prime minister Yitzhak Rabin in the mid-1990s, was arrested in 2004 for attempting to smuggle 32,000 Ecstasy tablets from the Netherlands to Israel using an expired diplomatic passport. Segev, a former doctor whose medical license was revoked, was released from prison in 2007 and had been living in Africa in recent years.

The Shin Bet said Segev met with his operators twice in Iran, and also met with Iranian agents in hotels and apartments around the world. Segev was given a “secret communications system to encrypt messages” with his operators. The statement said that Segev maintained connections with Israeli civilians who had ties to the country’s security and foreign relations.

It said he acted to connect them with Iranian agents who posed as businessmen.

Israel and Iran are bitter enemies, and the allegations against Segev are extremely grave. Israel considers Iran to be its biggest threat, citing Iranian calls for Israel’s destruction, Iran’s support for hostile militant groups like Hezbollah and its development of long-range missiles.

Prime Minister Benjamin Netanyahu has been an outspoken critic of the international nuclear deal with Iran and welcomed the US decision to withdraw from the deal. More recently, Israeli forces have carried out a number of airstrikes on Iranian forces in neighbouring Syria.

Israel has indicted a former cabinet minister on suspicion of spying for Iran, Israel’s Shin Bet internal security service said on Monday. In a statement, the Shin Bet said Gonen Segev, energy minister from 1995 to 1996, had been living in Nigeria and “was recruited by Iranian intelligence and served as an agent”.

Investigators found that Segev made contact with officials at the Iranian embassy in Nigeria in 2012 and that he visited Iran twice for meetings with his handlers, the Shin Bet said. Segev, it said, received an encrypted communications system from Iranian agents and supplied Iran with “information related to the energy sector, security sites in Israel and officials in political and security institutions”.

The Shin Bet said Segev, 62, put some Israelis involved in the security sector in contact with Iranian intelligence agents, introducing the Iranians as businessmen. Segev’s attorneys put out a statement saying that most details from the indictment remained a secret, as requested by the state.

“Even at this early stage it can be said that the permitted publication attributes extreme gravity to the events, even though within the indictment, of which the full details remain confidential, a different picture is painted,” said the lawyers’ statement.

Segev, a physician, was jailed in Israel in 2004 after being convicted of attempting to smuggle Ecstasy pills into the country. He left Israel in 2007 after his release from prison. The Shin Bet said Segev was arrested during a visit to Equatorial Guinea in May and extradited to Israel, where he is being detained. He was indicted on Friday.

Israel has long been locked in a shadow war with arch-foe Iran, which supports Islamist guerrillas in the Gaza Strip and Lebanon and whose nuclear program is widely believed to have been targeted repeatedly by Israeli saboteurs. In January, Israel said it had cracked a Palestinian militant cell suspected of having been recruited and handled by Iranian intelligence officers who worked out of South Africa. The suspects? lawyer denied the charges.