However, a record one in two voters remains undecided and make-up of coalition unclear 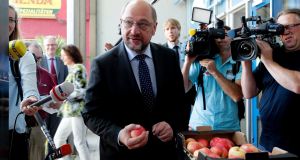 Candidate for the German chancellorship Martin Schulz: “You have the choice between a chancellor who avoids every debate about the future and somebody who tells you what he wants.” Photograph: Friedemann Vogel/EPA

With little more than a month to go until election day, Germans appear to be resigned to a fourth term of Chancellor Angela Merkel, even though a record one in two voters remains undecided.

Some 45 per cent of Germans appear to believe that Dr Merkel and her Christian Democratic Union (CDU), given its steady 15-point lead in polls, will win the September 24th general election.

But almost the same number – 46 per cent – confessed in the poll for daily newspaper Frankfurter Allgemeine that they have yet to make up their mind how to vote.

“At the same point before the last election, 39 per cent were unsure,” said Prof Renate Köcher, of polling institute Allensbach.

Not only are half of Germany’s 61 million voters undecided but, according to the poll, there is no clear coalition preference either.

Voters are split almost equally among the most likely options. Most popular is a third grand coalition between CDU and SPD followed by another CDU alliance with the liberal Free Democratic Party (FDP), which ruled from 2008 to 2013.

In the main Allensbach poll, reflecting other polls, both main parties are about two points shy of their 2013 results: Dr Merkel’s CDU on 39.5 per cent and the SPD on 24 per cent.

The Allensbach poll, based on 1,421 personal interviews, shows that – on a personal level, at least – the election is over.

Some 71 per cent of those polled believe their new chancellor will be their old one. And just one in two SPD voters backs Mr Schulz for the top job while 80 per cent of CDU voters are behind Dr Merkel.

“Merkel doesn’t polarise, something often put down as a conscious strategy but which is also certainly a personality trait,” added Prof Köcher.

In a bid to close the gap in support, Martin Schulz has launched a a 40-city election campaign, accusing Dr Merkel of refusing to engage on issues.

“It’s being written and projected that the election is already done,” he told a crowd in the northern port city of Bremen. “But polls are not results. You have the choice between a chancellor who avoids every debate about the future and somebody who tells you what he wants.”

Hoping to re-energise his campaign after an early surge and subsequent slump, Mr Schulz accused Dr Merkel of being too soft with US president Donald Trump.