US deepens military ties with Ukraine in effort to end conflict 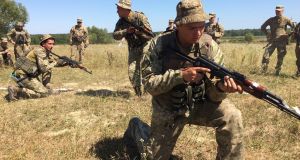 Ukrainian soldiers training under the guidance of US and Canadian instructors at the Yavoriv base in western Ukraine. Photograph: Daniel McLaughlin

Cradling Kalashnikovs and moving in a fast, low crouch, four Ukrainian soldiers hunt an imaginary enemy through rooms marked out in tape on the parched ground. They seem oblivious to the crack of explosions from a nearby field, where their comrades are practising blasting their way into besieged buildings.

Two foreign instructors closely watch each dummy raid – an exercise they call a “glasshouse” – and then offer the young soldiers more of the expertise they are bringing to Ukraine from the US and Canadian militaries.

Officers from the US and other Nato states have worked with Ukrainian troops since 2015, and co-operation is only expected to deepen despite fears over President Donald Trump’s commitment to US allies and warnings from the Kremlin.

The US military has already trained more than 4,000 Ukrainian soldiers here at Yavoriv, a vast firing range near the country’s western border, in everything from battlefield first aid to anti-ambush techniques and how to deal with roadside bombs.

To help Ukraine fight Moscow’s proxy militia near its eastern border, Washington has given the country more than $600 million (€512 million) in training and equipment since it ousted pro-Kremlin leaders and pivoted to the West in 2014. Wary of Russia’s reaction, the US has so far only supplied “non-lethal” aid such as body armour, night-vision gear and anti-artillery radar.

But now there is growing talk in Washington, and rising hope in Ukraine, that the White House will approve plans to give Kiev’s military high-tech. anti-tank missiles and other powerful weapons, making it a far deadlier foe for the separatists and the Russian soldiers and volunteers who stiffen their ranks.

The proposals, reportedly drawn up by the country’s departments of state and defence, are likely to top the agenda today – Ukraine’s independence day – when Pentagon chief James Mattis visits Kiev with the new US special envoy to Ukraine, Kurt Volker.

As they meet Ukrainian officials to map out the future of the two countries’ co-operation, 600km away in Yavoriv the latest battalion of Ukrainian soldiers will be working through an intensive 55-day training course under US supervision.

“We’ve learned a lot – how to react to contact with the enemy, how to move in the open, how to clear a building, how to react to an ambush – so many things,” says Petro Tsivchik (21), who expects his first deployment to the east within a fortnight.

What awaits him is the bloodiest edge of Russia’s constantly shifting, undeclared war against Ukraine, in which battles are fought everywhere from cyberspace to the shrapnel-showered trenches and collapsing coal and steel towns of the east.

The so-called zone of anti-terrorist operations is a realm of doublespeak: its war is not officially a war; during its current “ceasefire” shells kill and maim people nearly every day; it is the site of a major Russian-led military operation, yet the Kremlin blithely denies the obvious role of its troops and armour.

This may be the fog of modern “hybrid” war, but the numbers show the stark reality: more than 10,000 killed since spring 2014, 24,000 injured and 1.6 million forced to leave their homes; twice as many civilian casualties in the first half of this year as in the same period of 2016, according to international monitors.

The so-called Minsk agreements aimed at ending the war are moribund, and so the talks brokered by Germany and France on implementing them are largely pointless; few people think the deal can work, but no one has yet offered a better idea.

Unexpectedly, given Trump’s wish to cut US involvement around the world, Washington now seems to have decided to force the pace on the issue.

While Trump has not disavowed his desire for a rapprochement with Moscow, in recent months Congress has tightened sanctions on Russia and US officials have spoken up strongly for Ukraine and denounced Kremlin aggression – and no one more than Volker, who became the US special envoy to Ukraine in July.

“Russia is already in Ukraine, they are already heavily armed, there are more Russian tanks there than in western Europe combined,” he said.

“It would give Ukraine an opportunity to defend itself if Russia were to take further steps against Ukrainian territory. Russia says it won’t do that and isn’t doing that, so then there should be no risk to anybody if that’s the case.”

The Kremlin says US weapons supplies to Ukraine would only escalate the conflict, and Putin’s aide, Vladislav Surkov, surely reiterated that warning when he met Volker in Minsk on Monday.

Surkov said they talked “honestly, seriously and without illusions” and brought “fresh ideas and innovative approaches” on how to end the conflict, but no details of their discussions were forthcoming.

Moscow knows the US could force Ukraine to come to terms, but Putin must find an exit strategy that masks the fact that, in trying to restore Russia’s former might, he has driven its closest ally into the arms of the West.

“I served in the Soviet army and no one ever thought we’d fight Russia,” says Pyotr Layevski (45), whose traditional blue-and-white-striped military vest reveals a tattoo of a wolf on his shoulder and the legend: “Kill or get killed”. He became an army instructor after being wounded in the east.

“We’re learning from each other all the time, working more closely and sharing experience with the Nato instructors . . . The most important thing is to have this support, to know we have allies against a pretty tough opponent.”

At this ever-expanding training centre, soldiers run through drills in the fields and forests while military staff study how Nato armies manage operations, with the aim of making Ukraine’s forces fully interoperable with its new western allies by 2020.

For the US military, this is not only a remarkable chance to work in what until relatively recently was hostile territory, but to glean tactical and technical information on how Russian and Russian-trained forces fight.

“The Ukrainian soldiers we’re working with are really motivated about what they’re doing . . . I’d be proud to have any one of them in my brigade fighting right alongside of us.”