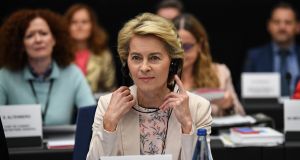 MEPs have blocked two of the nominees for the next European Commission over inconsistencies in their personal financial declarations.

The decision by the parliament’s Legal Affairs Committee to stop parliamentary hearings on the Romanian and Hungarian nominees, while approving 24 others, represents first blood for parliamentarians in their long-running tussle to assert authority over the commission nomination process.

It is the first major setback for Ursula von der Leyen since she was elected to lead the next commission. Parliament will now write to her to say that the nominations are inappropriate and suggesting she seek new names – MEPs can only vote on the whole list, not on each nomination.

Rovana Plumb, the Romanian nominee to be transport commissioner, was rejected 15-6 over concerns that she had underdeclared by up to €1 million receipts to finance her campaign for the European elections.

Hungary’s Laszlo Trocsanyi, nominated for the post of European commissioner for neighbourhood and enlargement, fell foul (11 to 9) of conflict-of-interest claims about his law firm’s activities and work for the Hungarian government while he was minister for justice.

Had he reached the main hearings next week, Mr Trocsanyi was also likely to face questioning about his appropriateness for a job involving enforcing rule-of-law obligations on accession states. He has been a central figure in the legal changes in Hungary which have led to a major falling out with member states.

On Twitter after the veto, Mr Trocsanyi called it “a political decision, lacking any factual basis”, and said he intended to take legal action. Jozsef Szajer, head of the ruling Fidesz party delegation to the European Parliament, said the rejection was a sign of a witch-hunt against Hungary.

Among the nominees who survived Thursday’s scrutiny of financial declarations are a couple who may yet face difficulties – Belgium’s Didier Reynders and Sylvie Goulard of France are the subject of judicial inquiries in their home countries.

Former Belgian foreign minister Mr Reynders is under a preliminary investigation on suspicions of corruption, while former French defence minister Ms Goulard is a suspect in a case involving alleged fictitious jobs when she served as an MEP.

The main hearings take place next week in Brussels, with Ireland’s Phil Hogan scheduled for Monday afternoon. Mr Hogan, currently agriculture commissioner, has been nominated to take over the trade portfolio.

One of his key tasks will be to open and manage the difficult talks on the future relationship between the EU and UK post-Brexit. But he is also expected to face close questioning over the recently negotiated Mercosur trade agreement, which is strongly opposed by left and green MEPs, who see it as facilitating the setting of fires in the Amazon rainforest.