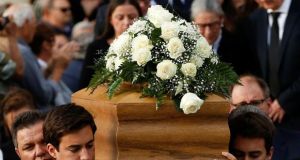 Journalist Daphne Caruana Galizia’s sons Matthew and Paul carry the coffin of their mother, who was murdered in a car bomb attack in Malta. Photograph: Reuters

In the two years before the assassination of investigative journalist Daphne Caruana Galizia last month, there were five car bombs on the island of Malta, most of which were never heard about beyond the country’s borders – and all of which remain unsolved by Maltese police.

Look back a bit further and the picture becomes even grimmer. The use of explosive devices such as car bombs has been rising steadily: there have been 19 bomb attacks since 2010, almost three a year. During that time, five people have died. Caruana Galizia was the third target this year alone.

In that sense, the unfortunate truth is that there was nothing unusual about the decision by whoever killed the 53-year-old journalist to cold-bloodedly target her, plant a bomb under her rented white Peugeot 108 – and, most telling of all, expect to walk away scot-free.

What was different was that Daphne Caruana Galizia was a journalist, known for her uncompromising investigations into corruption and organised crime, and for her reporting on the so-called Panama Papers, the cache of 11.5 million documents leaked in 2015 that detailed the financial affairs of an international portfolio of the rich, the famous, and the infamous.

And yet, in the end – not unlike Veronica Guerin in Ireland in 1996 – even that public persona did not protect her.

In the world of Mediterranean organised crime, her “hit” was just the latest in a long list, carried out almost according to a local gangland template.

For that reason, there is well-justified scepticism among the Maltese public that the outrage that followed her death will change anything – much less end the long-running impunity of the killers.

There have been some belatedly tough responses to that culture of impunity over the six weeks since Caruana Galizia died within view of her home in Bidnija, a rural area near the town of Mosta, on October 16th.

The European Parliament has raised “serious concerns” about democracy and the rule of law in Malta. In particular, it has accused Maltese police of inexplicably failing to investigate “serious allegations of corruption and breaches of anti-money laundering and banking supervision obligations”.

More scathingly, the head of the Italian parliament’s anti-mafia commission, Rosy Bindi, on a fact-finding visit to the capital, Valetta, warned: “If the Mafia sees Malta as its little paradise, then Malta should look at the quality of its economic expansion.”

There has been much speculation about a mafia connection, in one form or another. Sicily’s chief prosecutor Carmelo Zuccaro said he “could not exclude” the possibility that Caruana Galizia had been murdered by the gang behind a multimillion-euro fuel smuggling network spanning Libya, Malta and Italy, about which she had written repeatedly.

Last week, Galizia’s family instigated legal action against the police for allegedly failing to ensure the investigation into her killing is impartial and independent.

Malta’s prime minister and Labour Party leader Joseph Muscat (43) has acknowledged that Caruana Galizia was one of his harshest critics “politically and personally”.

However, he described her killing as a “barbaric act”, “a very professional job”. And within hours he requested the assistance of the FBI to track the assassins.

Since then, a three-person team of organised crime experts from the EU policing agency Europol has joined the FBI on the island “to support the investigation, wherever it may lead”.

Given the force of the blast, which catapulted the journalist’s car into a roadside field, there’s been speculation that the explosive agent used in the bomb may have been semtex. This is a military-grade plastic explosive used in the bombing of Pan Am Flight 103 over Lockerbie in 1988 and by the Provisional IRA during the Troubles.

But Maltese police say such reports are “premature”. If semtex was deployed, then it is the first time to be used on the island and an interesting departure. Explosives here are typically more rudimentary. This could, however, be an attempt to muddy the investigative waters.

What seems certain is that the bomb was detonated remotely.

“Emerging evidence makes us think that the bomb was placed under the car and set off using a remote trigger,” said a government spokesperson. “If that is so, it’s possible the foreign experts working with us may be able to help identify the mobile phone used to detonate it.”

This is an area of considerable FBI expertise. The bureau has warned in the past about the use of modified mobile phones to detonate bombs from relatively long distances, often when the modified phone receives a call from another pre-arranged mobile number.

Triangular tracking of mobile phones provided crucial evidence in reconstructing the alleged bombers’ movements in the hours before the Omagh bombing in Co Tyrone in 1998, in which 29 people were killed.

However, while triangulation is almost always possible in urban areas, rural areas with fewer masts pose much greater technical difficulties.

A key task for the police will be to establish whether there were any unusual movements in the area around Caruna Galizia’s home on the day of her death, and to try to match them to any available mobile phone data.

It’s indisputable, however, that the record of the Maltese police is less than confidence-inspiring, although the pattern of assassination here is well known, tried and tested:

Those five bombs in 13 months led inexorably to the doorstep of Daphne Caruana Galizia. In each case, the killers walked away. Why, ask her family, should her case be any different? Nobody, it appears, has an answer.