Negotiations to agree stimulus and budget neared a record length

The talks that began on Friday are still ongoing as most of Europe returns to begin its working week. Video: European Council 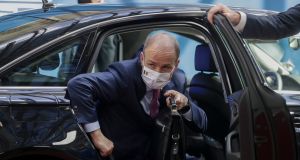 A recovery fund that is cut too drastically to please a blocking group of budget-conscious northern European Union member states risks being inadequate to counteract the severe economic impact of the pandemic, Taoiseach Micheál Martin has said.

Negotiations to agree the stimulus package and the next seven-year EU budget neared a record length as leaders met into the evening once again after all-night talks, in a summit that had been supposed to conclude on Saturday.

A group of so-called frugal states led by the Netherlands, wary of incurring joint liabilities with other EU member states and keen to claw back national contributions to the bloc’s budget where possible, held up progress in the talks with demands for cuts. The other states that make up the ‘Frugal Four’ are Austria, Denmark and Sweden.

An initially proposed €500 billion in grants that would be funded by borrowing by the EU Commission and issued to member states without the need for repayment - a vital issue for countries like Italy already struggling under a significant debt burden - was negotiated down to €390 billion in draft documents.

In addition, draft proposals to clinch a deal included cuts to research funding, abolishing a plan to invest in co-ordination in health between member states and strengthen health systems for future crises, and halving planned subsidies to help EU economies transition towards climate neutrality.

The Taoiseach warned that the scale of the economic emergency meant an ambitious package was necessary, and warned that reducing it too much could render it ineffective.

“Our interventions have been very strongly on the side of getting a deal. We’ve been quite forthright about the need to get the balance right and not to dilute the package too much so that it may lose some of its impact,” Mr Martin said.

“There’s a responsibility on European leaders really to get this through to enable Europe to recover economically.”

Ireland and other member states have strongly advocated not reducing the amount of grants below €400 billion, due to serious fears about the ability of the overall EU economy to cope with the effects of a pandemic forecast to cause a historic 8.3per cent drop in the bloc’s gross domestic product this year.

The Italian economy is taking a particularly hard hit, and was already fragile to shocks due to a large debt burden dating back decades, leading to fears of widening divergences in the EU that could trigger a repeat of past debt crises.

The frugal states were always opposed to joint borrowing to fund the recovery plan, and feel they can only agree to it if they have guarantees that the money is spent wisely and reforms are put in place to avoid a repeat of economic crisis.

Dutch Prime Minister Mark Rutte called for the EU Council of national leaders to be given a “decisive role” in overseeing how the funds are spent by member states, to ensure prudent policies.

“We have to manage the money well... and if in the end grants have to be given as well as loans from such a fund, it is even more important to able to enforce reforms as much as possible,” Mr Rutte told journalists.

The all-consuming focus on the recovery package prevented leaders from addressing wider issues of the joint EU budget, which they had failed to agree in February before the pandemic hit.

Yet to be agreed are issues including proposed joint EU levies to allow the Commission to repay the borrowing directly without needing the help of member states, as well as “climate action, migration, defence, agriculture, and rule of law” according to a diplomat.