Families urged not to smuggle drugs into prison as visits resume 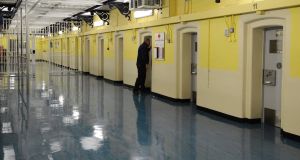 A visit ban was imposed in mid-March, which kept prisons free of the virus and also severely limited the amount of drugs being smuggled in. Photograph: Cyril Byrne / The Irish Times

Prisoners who were unable to get smuggled drugs during the Covid-19 ban on family visits could die of overdose if families bring in supplies now, the Irish Prison Service has warned.

A visit ban was imposed in mid-March, which kept prisons free of the virus and severely limited the amount of drugs being smuggled in. Visits began again yesterday.

The Irish Prison Service (IPS) has pleaded with families not to bring in drugs: “Drug overdose is now the main threat facing your loved ones in prison,” they told families in a new booklet.

“We need your help to keep them safe. During the past few weeks your loved one may have stopped using or reduced their drug use. As a result they will have lower tolerance levels.

“There is a huge risk of them overdosing if they start using again,” it states. “We know that sometimes you may feel under pressure to bring drugs into prison. The risk is too great. It can be fatal.”

Visits will resume on stricter conditions. Prisoners can receive just one 15-minute visit every two weeks. Only one person can visit at a time. All visits will take place behind screens, preventing contact between parties.

Prison authorities hope the rules will cut smuggling: “It will be tough on families. There will be complaints. But it could put us in a better position, drug-wise, than before the pandemic,” said one source.

When visits were stopped in March, the IPS allowed prisoners to see their families through video calls. Families are still able opt for video visits; prisoners can receive a video visit every week or a physical visit every two weeks.

Kathleen Cash, who saw her son in Mountjoy for the first time in four months on Monday, said he was finding the regime very hard, particularly “because it’s his first time in prison”.

Until last month Ms Cash’s son was in Cloverhill Prison where she said he got two video calls with her a week. “He’s here in Mountjoy nearly a month and he hasn’t got one. It’s taking a toll on him. Before the virus they were used to two /[physical/] visits a week. They could get a hug or whatever but now that’s gone.”

However, she said she was grateful the IPS has kept the prisons free of the virus. “Thank God so far, so good. It is working whatever they’re doing. That is the main thing I suppose.”?

Meanwhile, prison numbers have started to tick upwards again after falling to their lowest level in three years in June. The upwards trend is due to the resumption of court sittings and the return of a small number of prisoners who reoffended while on temporary release.

At one stage at the height of the pandemic, about 12 per cent of the prison population was on temporary release to free up space for quarantining prisoners.

As of Friday prisons were 86 per cent full with 3,750 in custody and 311 on temporary release. However, this is still well below the pre-coronavirus population which was usually more than 4,000.

The reduction in prison numbers has been welcomed by reformers and the Inspector of Prisons Patricia Gilheaney who wrote in a recent blog post: “In the longer term and post pandemic serious consideration must be given to maintaining and increasing reduction in the prison population.”

1 How one couple’s weekend away resulted in 30 Covid-19 cases
2 Miriam Lord: Government’s latest comedy of errors offers little to laugh about
3 US presidential debate: who won, was it any good, were there any surprises?
4 Taoiseach tells TD to ‘cop on’ over criticism of contact tracers asking about pubs
5 US presidential debate in quotes: ‘It’s hard to get any words in with this clown’
Real news has value SUBSCRIBE