Coronavirus: Concern over new outbreaks on building sites and in supermarkets 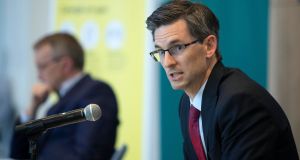 Workers have been urged not to “drop their guard” in protecting themselves against coronavirus as the State’s acting chief medical officer raised concerns about new Covid-19 outbreaks in workplaces.

Dr Ronan Glynn said that public health officials were now seeing outbreaks in a range of work settings, including on construction sites and in fast food outlets and supermarkets.

Speaking at the National Public Health Emergency Team briefing, Dr Glynn asked workers to “stay vigilant” as he said more than 20 new Covid-19 cases had been detected so far among workers at a building site in Dublin city, the first significant cluster at a construction site.

He described the workplace and ”most particularly shops, services and supermarkets” as “the new front line” in the fight against the virus.

Workers should know that “the disease doesn’t stop at the door of your house” and that they must take all the public health precautions they should be taking in their workplace, including maintaining physical distancing from their work colleagues, he said.

He said he felt that people in general were forgetting about not keeping a distance of two metres in social settings, including when they meet others outdoors.

Nphet reported no new deaths from Covid-19, leaving the death toll at 1,753. There were a further six confirmed cases, bringing total known cases of the disease to 25,766.

Of 270 cases notified to State health officials over the past 14 days, the median age as 34.

Some 69 per cent of these newly infected people were under the age of 45.

The remaining 78 cases notified over the past fortnight were spread across 17 counties.

Dr Glynn said there had been “a couple” of Covid-19 outbreaks at fast food outlets around the country including a significant number of cases linked to an outlet in Kildare.

There had been a small number of clusters amongst staff at supermarkets. Nphet could not rule out that a customer in a shop has picked up the virus for a staff member, he said.

He reminded people to wear face covering when in shops or other indoor retail outlets.

Dr Sumi Dunne of the Irish College of General Practitioners said that GPS were referring more and more people with symptoms of the disease to be tested for Covid-19. She reassured people that they should feel “absolutely no blame” about coming forward.

“We are not interested in how you picked up the virus,” she said.

Asked if she was starting to see stigma amongst people going to see GPs with symptoms of Covid-19, she said: “People are worried and I think they do feel that they will judged.”

A survey conducted for the Department of Health has shown that 70 per cent of the population now say that they are wearing face coverings, up from 41 per cent a month ago.

Some 75 per cent of people think there will be a second wave, up from 30 per cent in June.

Meanwhile, the number of people receiving the Government’s special pandemic unemployment payment fell by 31,800 in the past week to 313,800 as more people returned to work as the country reopens. At peak, almost 600,000 people were receive the special payment. Almost 100,000 people have stopped claiming the payment in the past fortnight.

Elsewhere, the North’s department of health (DoH) reported no coronavirus-related deaths over the weekend, leaving the total number of fatalities recorded by the department at 556.

Over the weekend 23 new cases of coronavirus were identified, out of 3,552 individuals who were tested.

Twenty-five cases of Covid-19 were confirmed in the Causeway Coast and Glens council area in the last week. The Public Health Agency (PHA) said on Thursday that a cluster had been identified in Limavady, Co Derry, which has been linked to a party at a residential address.