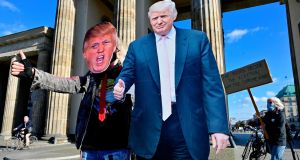 A supporter of US president Donald Trump in front of the Brandenburg Gate as a member of the Democrats Abroad organisation holds a placard urging that all ballots be counted, in Berlin. Photograph: John Macdougall/AFP via Getty

At least three times as many Americans living in Ireland voted in the 2020 US presidential election as did so in 2016, according to newly released data.

Requests for voter ballots from Americans in Ireland had increased by 210 per cent by mid-October compared with four years ago, according to figures from the Democrats Abroad Ireland group.

Carija Ihus, chairwoman of the group, says she expects the final number of Irish-based voters will be even higher as American citizens could request absentee ballots up until November 2nd.

Although international coverage of Donald Trump’s presidency may have prompted more people to vote, strong voter registration campaigns – or voter drives – also played a role in the rise in ballot requests, says Ihus. A dozen Democratic Party voter registration drives were held in 10 Irish counties during the summer, while 800 postcards were sent to non-party members encouraging them to cast a vote.

“This time the Democrats in Ireland really threw everything into trying to get people out to vote. We contacted Americans we knew lived here but who may not be members of the party. We could see people really wanted to vote in this election.”

Trump’s policies on immigration, the environment, international relations and trade sent many more overseas Democrats to the polls this year, says Ihus. The American system of taxation, which is based on citizenship and not where you live, always attracts overseas votes, she adds.

After a strong international drive to get as many voters out as possible, the number of overseas ballot requests rose nearly threefold, according to Democrats Abroad data. The group estimates that 1.8 million Americans around the globe will have voted in this election once all ballots are counted. This is up from the 930,000 US citizens and members of the US military who requested and received ballots in 2016.

According to the non-partisan website votefromabroad.org, 75 per cent of their overseas registered voters identify as Democrats and 2.9 per cent as Republicans.

Ihus says the overseas vote has played an important role in the final counts of this year’s election and that many of these ballots are being counted in battleground states. As a Democrat, she would have “liked to have seen a landslide” but said the party went into this election knowing it would be “a hard run”.

“Like him or not, Trump is popular and the only way he’s going to go is if we manage to get the votes to get him out. That has been our focus. We knew how close this election was going to be and the important role early votes would play.”

James Connor, Irish representative for Republicans Overseas, has been encouraged by the rise in overseas voter participation in the 2020 election.

Connor, who lives in Limerick and became the chairman of Republicans Overseas two months ago, plans to develop the group’s presence in Ireland. He disputed the votefromabroad.org data that just 2.9 per cent of overseas voters are Republicans, saying supporters of the party were “more reserved” when asked to state their political allegiances and that “Republicans don’t get involved in the numbers game”.

“I think there’s a lot of interest here in Ireland. I’ve even had Irish people reach out to me and say we really liked what you had to say on the radio and I’m glad somebody is representing another point of view. We don’t all think the same way.”

Connor says Trump had done a “phenomenal job” over the past four years and has a “great record of success”. However, this year’s election and the counting of votes in recent days have been “a mess”, he says.

“I spent 20 years of my life serving in the military. When you see the country you loved and fought for in this state it’s heartbreaking. And I don’t place the blame at the feet of the president, not this one or the previous one. I blame the Congress and the Senate.”