Mairead McGuinness clears first hurdle to be approved as commissioner 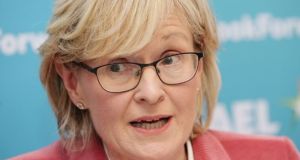 Mairead McGuinness is set to face hearings in the European Parliament next Friday October 2nd.

Ms McGuinness was cleared of conflicts of interests to take up the role of Financial Stability, Financial Services and Capital Markets Union in the commission by the parliament’s legal affairs committee on Thursday.

Latvia’s Valdis Dombrovskis, an existing commissioner who was nominated to replace Mr Hogan in the trade role, was also cleared for the job.

Both are now set to face hearings in the European Parliament next Friday October 2nd, at which they will face questions on their suitability for their roles from the parliament committees that work on their new brief.

The new makeup of the European Commission must then be approved by a general vote in the parliament. Left-wing and Green MEPs have warned they will use the opportunity to scrutinise Ireland’s record on financial and tax affairs, as corporate tax transparency is part of the Fisma brief. However, Ms McGuinness has a high level of support in the parliament and has been its vice-president since 2014, and is expected to be ultimately approved for the role.