Lara Marlowe: His election has not provided any sense of resolution to French angst 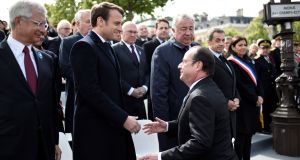 At first glance, the election of Emmanuel Macron as president of France on Sunday night looked like a dream come true. A depressed and ageing country has chosen its youngest leader since Napoleon, an optimistic anti-Trump who loves Europe and speaks constantly of unity and renewal. After elections in Austria and the Netherlands, France too said no to nationalist populism.

Macron, the handsome, young, energetic hope of France and Europe, is curiously ill-loved. He won 66 per cent of the vote, yet 60 per cent of those who voted for him did so because they rejected the extreme right-wing Front National candidate, Marine Le Pen, not because they like Macron or support his programme.

Macron was elected by only 43.63 per cent of registered voters

An exceptionally high percentage of the electorate, 36.91 per cent, manifested their refusal to choose between Macron’s liberal economic policies and Le Pen’s intolerance by abstaining or casting a blank ballot. When these are considered, Macron was elected by only 43.63 per cent of registered voters.

Even after Marine Le Pen’s disastrous performance in the May 3rd television debate, her niece and probable successor, Marion Maréchal-Le Pen, said the party’s goal was still victory, “failing which, a score of 40 per cent, which would position us well to be the opposition, perhaps even the majority, in the Assembly”.

Just as the seed of defeat was buried in Macron’s victory, there was a kind of victory shrouded in Le Pen’s defeat. That a party advocating withdrawal from the euro and the EU, the closure of French borders and cruel treatment of immigrants could win 34 per cent of the vote in a presidential election – a total of 10.6 million votes – was shocking. It was by far the party’s highest score ever in a French election. The gravity of Macron’s tone on Sunday night owed a great deal to that realisation.

Now the knives are out for the Le Pen, the “tsarina” of the Front National, and her “Rasputin”, the party’s vice-president, Florian Philippot. Maréchal-Le Pen and the orthodox wing of the party blame Philippot, originally from a breakaway socialist group, for devising left-leaning social polices to appeal to voters of that persuasion.

Le Pen promised a “transformation” of the party on Sunday night, which is sure to include a name change. Although she proclaimed herself the leader of opposition to Macron, her chances of survival at the head of the party will depend on its performance in the June 11th and 18th legislative elections, to which all eyes now turn.

At the Louvre on Sunday night, Macron acknowledged the large numbers of voters who voted for him reluctantly, as well as those who voted for Le Pen. The latter “expressed anger, disarray, sometimes convictions”, he said. “I respect them, but I will do everything in the next five years to make sure they have no more reason to vote for the extremes.”

One couldn’t help wondering if Macron was attempting to reconcile the irreconcilable. For Front National voters, the large numbers of Africans and Arabs celebrating Macron’s victory at the Louvre were confirmation that the “immigrationist” president intends to “betray” France. Front National followers who talk about a conspiracy of freemasons were likely to see confirmation of their twisted theories in IM Pei’s glass pyramid, a masonic symbol, looming behind the president-elect.

And when outgoing president François Hollande placed a hand on Macron’s neck in a paternal gesture at the ceremony marking the anniversary of the 1945 victory over the Nazis at the Arc de Triomphe on Monday morning, he strengthened the belief of right- and far-right voters that Macron will be a continuation of Hollande.

Macron’s election elicited surprisingly little joy in France, partly because the French fear jihadist attacks against large groups. There were no hooting cars on the Champs-Élysées or the Canebière, only police vans lined chock-a-block across the bridges of the Seine.

Sunday’s election did not provide a sense of resolution. Instead, the country seems to hold its breath as it waits for Macron’s first steps in office, his appointment of a prime minister and the legislative elections.

“Our task is huge,” Macron repeated three times on Sunday night. He pleaded for “a true majority, a strong majority, a majority for change” in the National Assembly.

Officials at Macron’s En Marche movement insist that an absolute majority is possible. Yet 61 per cent of respondents in an Ipsos poll for Le Monde said they do not want that to happen. The new assembly may be divided among the same four factions that won the lion’s share of votes in the first round of the presidential election: extreme left, extreme right, conservative Gaullists and centrists.

Macron has promised to reform the labour code this summer, by decree if necessary. Once the uncertainty of the elections is over, there is apprehension regarding a “third round” of violent opposition in the streets.