‘There is in every child a Mozart who is murdered,’ says president of poverty’s effects 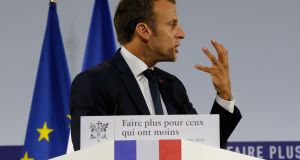 Emmanuel Macron: “A four-year-old from an underprivileged family knows half as many words as a child from an affluent family.” Photograph: Michel Euler/EPA

President Emmanuel Macron unveiled his twice-postponed “national strategy for the prevention of and struggle against poverty” on Thursday. But it is unlikely to transform his reputation from that of “president of the rich” into “president of the poor”.

The plan will cost €8 billion over four years and includes three main measures: more attention to children and teenagers; a government-run “insertion service” to push the jobless towards employment, and simplification of the welfare system, by merging various types of benefits into a single “universal activity revenue” payment.

Macron denounced what he called “the scandal of poverty” and “social determinism” in France, where nine million people live below the poverty line, one-third of them children. It takes six generations, or 180 years, for an underprivileged family to reach the middle class, he noted.

France spends 32.1 per cent of its GDP on welfare, four-fifths of it on healthcare and the elderly. The European average is 27.3 per cent of GDP. Without social welfare, 23.6 per cent of the population – rather than 13.6 per cent at present – would live in poverty.

“Our model corrects a little,” Macron said. “It may enable people to live better than in many other countries, but it doesn’t enable us to eradicate poverty.” He wants “to refound a contemporary welfare state that speaks to the new risks and sources of instability in society, but which guarantees rights, emancipation and dignity”.

Macron’s initiative will be watched throughout the EU, because France is the laboratory for the “social Europe” he wants to create. He spoke of emancipation through work, and used the word “dignity” often.

Research has shown that “the root of inequality is found in the first years of life”, Macron said, quoting the writer Antoine de Saint-Exupéry, who described a small child marked by poverty as “Mozart being assassinated”.

“There is in every child, starting with the child born into a poor family, a Mozart who is murdered, because we determine collectively that he has no chance to become Mozart,” Macron said.

Macron alluded to two measures he has already taken in the hope of “saving” young children. Class sizes have been halved for six- and seven-year olds in poor areas. And nursery school is obligatory from the age of three. “A four-year-old from an underprivileged family knows half as many words as a child from an affluent family,” he noted.

Echoing the debate in Ireland, Macron said that childcare “must be accessible to all, whatever their income and their address”. Only 5 per cent of poor children attend creches, compared with 22 per cent of children from better-off families. He promised a €100 million fund to train childminders. The state will finance 90 per cent of creche construction in poor towns.

All children will be offered a free breakfast in school, and school lunches will be made available for as little as €1. Macron is raising the age limit for obligatory presence in school or vocational training from 16 to 18.

One in two recipients of the RSA, the basic French welfare payment of €550.93 per month for a single person, receive no supervision, Macron said. From now on, “Every beneficiary of the RSA will be given an appointment within a month of signing up, so that he is followed from the beginning”.

France will establish a government “insertion service” that will help the poor to achieve inclusion in society. France had abandoned efforts at inclusion, Macron said. “We have collectively reaped what we sowed, the inability to put people who have fallen into poverty back to work.” This created “dual distrust” that poisoned relations between the poor and the rest of society.

Poverty cannot be eradicated by throwing money at the problem, Macron warned. “I don’t want a plan for poor people to live a little better. I want us to give them the choice and the possibility, because they want it, not to be poor any more.”

As usual, the opposition condemned Macron’s plan out of hand. “The poverty plan is 62 cents a day,” Olivier Faure, the leader of the Socialist Party, posted on Twitter. “The fiscal cadeaux plan is €600,000 per average rich person ... Crumbs for some and cake for the others.”