Israeli election to delay US peace plan for Middle East 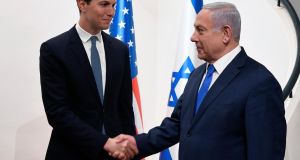 The long-awaited US peace plan for the Middle East, which was expected to be unveiled next month, is facing another significant delay after Israel called snap elections for September on Wednesday night.

Although the US peace plan is expected to favour Israel on many key issues, it will also probably require significant Israeli concessions and Mr Netanyahu, who is fighting with smaller parties for the right-wing vote, will be reluctant to publicly declare a willingness to compromise during an election campaign.

Washington has yet to commit to an exact timetable with respect to the political aspects of the so-called “Deal of the Century”, but chief Palestinian negotiator Saeb Erekat, speaking after Wednesday night’s Knesset vote, quipped: “Now it is the deal of the next century.”

Former US ambassador to Israel Dan Shapiro also predicted that the plan may never see the light of day.

US president Donald Trump’s top Middle East advisers, Jared Kushner and Jason Greenblatt, the architects of the peace plan, put on a brave face during talks in Jerusalem on Thursday with Mr Netanyahu, but made no specific commitments beyond saying next month’s Bahrain conference, focusing on the economic aspects of the plan, will go ahead as planned.

Mr Netanyahu tried to downplay the significance of the September election.

“Even though we had a little event last night – that’s not going to stop us,” he said.

Mr Trump said he was sorry to hear that Israel will face another election. “It’s too bad what happened in Israel,” he told reporters at the White House. “It looked like a total win for Netanyahu,” praising the Israeli leader as a “great guy”. “They’re back in the election stage. That is too bad.”

Mr Netanyahu vowed to win the September election with an even bigger majority. “We’ll run a sharp, clear election campaign which will bring us victory. We’ll win, and the public will win.”

He blamed Yisrael Beiteinu leader Avigdor Lieberman, who refused to join the coalition, for dragging the country into superfluous elections, describing him as “part of the left for bringing down a right-wing government”.

Nahum Barnea, one of Israel’s leading commentators, wrote in the popular Yediot Aharonot newspaper that this was the second time in a matter of months that Mr Netanyahu had dragged Israel into unnecessary elections.

“Israel has known many political crises in its 71 years. It has also known some dirty and even dirtier political tricks, corrupt and even more corrupt political bribery offers. What we saw last night in the Knesset was a new page in the process of the decline of Israeli democracy. A newly born Knesset chose to commit suicide only because of personal whims . . . Israeli politics is sick. Netanyahu is the last person who can cure it.”

1 Black Lives Matter protest planned for Dublin is cancelled
2 Luke ‘Ming’ Flanagan bares his bottom half to European Parliament
3 With Lincoln looking on, the crowd dropped to their knees as 7pm approached
4 Covid-19: Harris urges people not to think it’s ‘mission accomplished’ ahead of next phase
5 Trinity College Dublin to resume with as much face-to-face teaching as possible
Real news has value SUBSCRIBE