Speaker John Bercow has ruled out a third vote on the UK government's previously rejected Brexit deal if it remains "substantially the same". Video: ParliamentTV 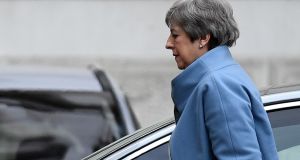 Ministers continued to negotiate with the DUP over the terms on which it could support Theresa May’s deal. Photograph: Leon Neal/Getty Images

Theresa May’s plan to win parliamentary approval for her Brexit deal was in deep disarray last night after the Speaker of the House of Commons said it could not be put to another vote without substantial changes.

Citing a convention dating back to 1604 that was last used in 1920, John Bercow said the prime minister could not put the same question to MPs in a single parliamentary session.

The Speaker’s statement, which took the government by surprise, came as ministers continued to negotiate with the DUP over the terms on which it could support Mrs May’s deal. If it is not approved at Westminster by Wednesday the prime minister will ask EU leaders on Thursday to agree to delay Brexit, perhaps by nine months.

Solicitor general Robert Buckland said the Speaker’s statement meant the government might have to ask Queen Elizabeth to prorogue parliament – ending the current session and immediately starting a new one.

“We are in a major constitutional crisis here. There are ways around this – a prorogation of parliament and a new session. We are talking about hours to March 29th. Frankly we could have done without this,” he told the BBC.

Mr Bercow’s statement delighted hard Brexiteers who want Britain to leave the EU without a deal on March 29th, as well as ardent Remainers who want to reverse Brexit through a second referendum.

Although Downing Street’s official response was to say the Speaker’s statement required “proper consideration”, the government was outraged by the intervention, of which it received no prior warning.

Mr Bercow said the statement was not his last word on the subject but he suggested the Brexit deal itself would have to be changed for a new vote to be held.

The EU has ruled out making any changes to the withdrawal agreement or offering further legal assurances beyond those agreed in Strasbourg last week.

Meanwhile, Taoiseach Leo Varadkar is due to hold talks today with European Council president Donald Tusk at Government Buildings. “The meeting is an opportunity to discuss Brexit and other important issues on the EU agenda, ahead of the European Council meeting in Brussels later this week,” a spokesman said.