Theresa May could write to EU seeking Brexit extension on Tuesday 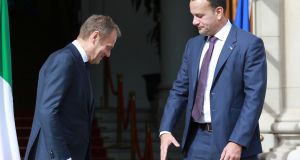 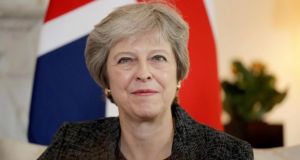 European Council president Donald Tusk has said all other EU leaders expressed “strong and ongoing solidarity with Ireland” on the Brexit issue, according to Taoiseach Leo Varadkar.

Mr Varadkar and Mr Tusk met for some 90 minutes in Government Buildings on Tuesday ahead of the critical European Summit in Brussels later this week.

The meeting came amid reports British prime minister Theresa May was writing a letter to the EU on Tuesday asking for an extension to Brexit beyond the deadline of March 29th. The United Kingdom’s plans to leave the EU were thrown into further chaos on Monday night after the Speaker of the House of Commons said Mrs May’s withdrawal agreement could not be put to another vote without substantial changes. But the EU has ruled out making any changes to the withdrawal agreement or offering further legal assurances beyond those agreed in Strasbourg last week.

The move by Mr Bercow put Mrs May’s plan to win parliamentary approval for the deal in deep disarray.

Mr Varadkar and Mr Tusk discussed what was described as the “state of play and latest developments with Brexit” including Monday’s intervention by House of Commons speaker John Bercow. It has cast doubt over a third meaningful vote on prime minister Theresa May’s withdrawal agreement taking place this week.

In a statement issued shortly after the meeting, Mr Varadkar said both leaders had “agreed that we must now see what proposals emerge from London in advance of the European Council meeting in Brussels on Thursday.

“Meanwhile, preparations continue in Ireland and across the European Union for a no deal scenario, which would have serious consequences for all concerned.

Meeting with Taoiseach @campaignforleo in Dublin to confirm full EU unity on #Brexit, discuss latest developments and uncertain political situation in London as well as preparedness for a no-deal brexit. pic.twitter.com/wtvQqRYYVQ

1. Cabinet sources say PM is writing letter to EU today asking for extension - frustration that she is going to ask for end date of June 30th, with proviso of up delay of up to 2 years

In a post on his Twitter account following the meeting, Mr Tusk said they had discussed the latest developments in the Brexit negotiations, and the “uncertain political situation in London as well as preparedness for a no-deal Brexit”.

Mr Tusk arrived in Government Buildings shortly after 11.30am and was greeted by An Taoiseach.

Both leaders proceeded into the meeting without responding to questions from the media.

Mr Tusk has been a regular visitor to Dublin during the Brexit process. He has used each visit to emphasise EU support for Ireland’s position on the backstop.

BBC political editor Laura Kuenssberg said in a tweet that Mrs May would write to the European Union to ask for a Brexit extension until the end of June and with a possible two-year delay.

Mrs May’s spokesman confirmed she had wrote to Mr Tusk to request a delay to Brexit on Tuesday.

Kuenssberg said on Twitter after Tuesday’s cabinet meeting in London: “Cabinet sources say PM is writing letter to EU today asking for extension - frustration that she is going to ask for end date of June 30th, with proviso of delay of up to 2 years.”

She added: “One source says there was no agreement in the room, another source furious that it seems PM avoiding making an actual decision again about the option she would like to take but wants option of short delay to try to find way of having another go with her deal.”

A European Commission spokesman said on Tuesday negotiators are awaiting the UK government’s decision on how to proceed. At the daily press briefing in Brussels he said: “We’re now exactly 10 days away from the UK’s withdrawal from the EU.

“We naturally follow all developments in the House of Commons very closely but it’s not for us to comment on or intervene in parliamentary procedures or conventions of the UK.

“It will be for the prime minister and her government to decide on the next steps and then to inform us accordingly and swiftly.” - additional reporting Agencies