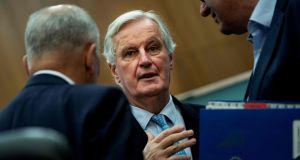 Not for the first time a “crunch summit” and “crunch week”, in the euphemism so loved by journalists desperate for attention-grabbing headlines, will perhaps turn out to have all the crunchiness of a black forest gateau.

Deadlines have a way of dissolving in the face of political imperatives, becoming permeable and malleable as diplomats struggle to reconcile seemingly irreconcilable objectives and unrealistic time frames.

And so, when EU leaders gather in Brussels on Thursday for their summit, expecting to cast their final word on a UK-EU Brexit deal, they will find that it is still a work in progress or at least in a state that is not yet fit to be put before them.

Close but not there yet. An agreed document that can be translated and sent to capitals for their lawyers to examine is reported to be close to readiness, a prerequisite before it can be considered by the summit. Too late for Thursday? Commission sources will not confirm we are there yet.

At this stage the expectation is that European Council president Donald Tusk will argue that a deal will only be discussable in general terms – even if a political understanding that will underpin a legal text has been reached, the European Council will not be willing to approve it in principle until that legal text is completed.

It is possible that a political agreement has been reached – Barnier hinted at as much on Monday when he spoke of the need to “go beyond good intentions to legal text” – but a commission source advised against seeing the political and legal difficulties in drafting as distinct.

With news reports from London suggesting the DUP may have accepted new “consent” formulations, the main remaining challenge in the backstop Mark 3 to be overcome appears to be the fiendishly complex mechanics of proposed customs controls between Britain and Northern Ireland while the latter remains part of the UK customs union.

At issue is exactly how “leaky” such arrangements could be without alarming member states determined to protect the integrity of the single market. RTÉ was reporting on Wednesday night that only the Northern Ireland’s VAT regime remains at issue.

One senior member state diplomat was on Wednesday warning that UK attempts to dilute “level-playing-field” provisions in the political declaration remained problematic. Any future free trade agreement between the EU and UK would have to be based on former prime minister Theresa May’s “indispensible” commitment to continued regulatory alignment, he said.

It is likely, sources say, that the leaders will wish to acknowledge Barnier’s assessment of significant progress in the negotiations and publicly endorse his and British prime minister Boris Johnson’s contention that a deal can still be finalised by October 31st (a real deadline!).

In those circumstances, in what would be an olive branch to the British PM, they could also decide that any request for an extension will only be considered at a second summit at the end of the month.

By which stage, as Johnson would no doubt point out to the House of Commons on Saturday, the request which he will grudgingly make as ordered would/could be redundant. He would like to have a deal by then that they could consider instead. It is a prospect that is increasingly being taken seriously in Brussels.

The diplomat also made clear, however, that any extension if it is considered would have to be conditional – either brief, to allow the textual completion of an agreed document, or longer if an election were called. “The time granted,” he said, “will be strictly proportional to the justification”.

The summit is not entirely preoccupied with Brexit, however.

Leaders will discuss Turkey’s incursion into northern Syria and its illegal drilling off Cyprus, the torturous negotiations on the EU’s next multiannual budget, the MFF, climate change, the EU’s latest “Strategic Agenda” – a blueprint for its foreign policy in the years ahead – and the new commission. That is now unlikely to take office on November 1st because of delays in parliamentary approval of the replacement for the rejected French nominee.

Among the most contentious debates will be over the commission’s request to open the accession process for Albania and North Macedonia. France and the Netherlands have held up even opening a process that could take many years, the French insisting they will not open any accession negotiation until the whole system has been reformed.

The commission and the member states in the Mediterranean warn that failure to provide even a prospect of membership to the two Balkan countries will undermine peace in the region at a time when Russia and China have been making diplomatic and economic overtures there.

Observers predict the important budget debate will go nowhere. The Finnish presidency has asked leaders to set the broad parameters of spending for 2021-2027, but the impact of Brexit and the gap between the cohesion countries and net contributors remains too big to bridge.

Although several member states, Ireland included, have acknowledged in broad terms the need to increase their contributions, none have yet been clear about how much that means. And the demands for major new spending programmes in border control, fighting climate change, and defence remain on the table with resolute defence by many states of old programmes like the Common Agricultural Policy and cohesion.

This is a circle that will definitely not be squared on Thursday.