Putin and Clinton among dignitaries at funeral Mass for former president 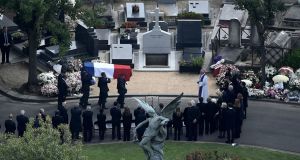 Thousands of French people demonstrated their affection for Jacques Chirac, the former president who died on September 26th at the age of 86, by queuing for up to four hours in the rain to pay homage to him.

They waited outside the Élysée Palace to sign books of condolence. They filed past his casket at Saint-Louis-des-Invalides overnight from Sunday until 7am on Monday.

Many held roses and shed tears. When they explained why they loved him, the words “simple,” “people” and “human” were repeated often. A disabled man said he had corresponded with Chirac. One woman recalled the euphoria of his campaign rallies. Another was grateful for his help in adopting a Romanian orphan. Many treasured the memory of a warm handshake.

Hundreds, perhaps more than a thousand, watched the funeral Mass on giant screens outside the Basilica of Saint-Sulpice.

Among those standing outside, some held apples, the symbol of Chirac’s 1995 presidential campaign, others an old campaign poster.

It was hard to believe that Chirac’s approval rating had plummeted to 16 per cent during his second term. In death, all was forgiven. An Ifop opinion poll indicates Chirac is now tied with Gen Charles de Gaulle as the most popular president of the Fifth Republic. Chirac’s opposition to the 2003 Iraq war was cited by 71 per cent of respondents.

Chirac had clashed repeatedly with those he called les Anglo-Saxons, most bitterly over the invasion of Iraq. English-language media published scornful assessments of Chirac’s record in office, the mass strikes of 1995, the bungled referendum on the European Union constitutional treaty, and the financial scandals when he was mayor of Paris.

The Trump administration waited three days after Chirac’s death to issue a statement, and sent no high-level envoy to the funeral, though the former president Bill Clinton joined mourners inside the basilica and listened to Mass with tears in his eyes.

The list of foreign dignitaries read like a map of Chirac’s foreign policy. The fact that many names were preceded with the words “former president of” or “former prime minister of” was testament to the fact that Chirac’s two terms, from 1995 until 2007, were long past.

Chirac forged a lasting friendship with Russia’s president Vladimir Putin on the basis of their shared opposition to the Iraq war. Putin made the return trip from Moscow for the funeral Mass only, and did not attend the lunch hosted by President Emmanuel Macron at the Élysée.

Lebanese prime minister Saad Hariri declared Monday a national day of mourning in his country, as it was in France. Hariri and Chirac’s daughter Claude embraced warmly inside the basilica. For as long as he ruled, Chirac sought punishment for Bashar al-Assad’s regime, which he blamed for the assassination of Hariri’s father, Rafiq.

Chirac believed that France, and indeed the West, were no longer the centre of the universe. He demonstrated great understanding of Arab and African civilisations. Arab and African leaders travelled to Paris in large numbers.

Some absences were puzzling. Chancellor Angela Merkel chose not to travel to Paris, though Germany’s president, Frank-Walter Steinmeir did. A seat was reserved in the basilica and at the Élysée luncheon for former chancellor Gerhard Schroeder, who like Putin joined Chirac in opposing the 2003 Iraq invasion.

The Élysée attributed Schroeder’s absence to “a misunderstanding” with the German embassy. Schroeder published a tribute to Chirac in Die Welt, calling him “a friend” and “a European who had a sense of history”. Chirac’s most powerful gesture, Schroeder said, was inviting him to D-Day commemorations in 2004.

Though he was close to Chirac, Morocco’s King Mohamed VI sent his 16-year-old son.

Archbishop Aupetit compared Chirac’s 1995 promise to heal France’s “social fracture” to the Gospel of Matthew, chapter 25. “For I was hungry and you gave me food, I was thirsty and you gave me drink, I was a stranger and you welcomed me, I was naked and you clothed me, I was sick and you visited me, I was in prison and you came to me.”

“There was in this former president, in this warm man . . . true love for people,” Aupetit continued. “He was as comfortable at the farmers’ fair as in the salons of the Élysée. When people met him they felt respected . . . Everyone knew of the tender compassion he had for the vulnerability of his daughter Laurence . . . When he was mayor of Paris, he went out at night to meet street people.”

Chirac’s daughter Laurence suffered from anorexia and died in 2016. He was buried beside her in a private ceremony on Monday afternoon.