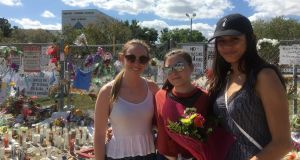 As a warm breeze drifts in from the Atlantic, exclusive houses peep behind picket fences. Here, under the impossibly blue skies, one of the deadliest mass shootings in American history unfolded less than four weeks ago.

As classes drew to a close on February 14th at Marjory Stoneman Douglas High School in Parkland, Florida, former student Nikolas Cruz entered the building and triggered the fire alarm. Over six minutes he unleashed a gun frenzy that was to leave 17 people dead; then he blended-in with the terrified students as they filed out of the school under police guard.

Today, the atmosphere outside the school is subdued. The hundreds of flowers that have been left outside the school railings are beginning to turn, the rows of signs pledging solidarity and support for the victims are peeling at the edges. The school has politely asked people not to bring any more mementos to the scene.

But still people come. Among them is Linda Beigel Schulman. Her son, Scott, was one of the three teachers killed in the attack. The 35-year-old geography teacher and cross-country coach was killed when he opened his classroom door to let students in as they ran from the gunman. He was shot dead as he stood at the doorway, students said. Many have credited Scott with saving their lives.

Today his mother is back at the school with other grieving parents to try to make sense of the tragedy. “I don’t think life will ever be the same, never get back to ‘normal’, whatever normal means,” she says, as she stands in front of the rows of flowers and candles.

Beigel Schulman came to the public’s attention when she took on the National Rifle Association (NRA) spokeswoman Dana Loesch at a live CNN debate in the week after the shooting.

Since the Florida shooting, the students of Marjory Stoneman Douglas school have touched a political nerve across the country

Quoting the Declaration of Independence, she asked “why are my son’s unalienable rights not protected as fiercely as the right to bear arms?”

Like many of the parents who lost children in the tragedy, her focus for the moment is not on how the gunman entered the school and why he was not stopped – those affected by the tragedy are awaiting the investigation.

But on one issue she is forthright. Asked if the suspect, who was last week charged with 17 counts of murder, should face the death penalty she replies: “Absolutely. He took my son’s life and so many others. I don’t think the government should have to pay one cent for his upkeep. Does that make me a bad person? Maybe…” she trails off.

Others have come for different reasons. Anna, Kasey and Seasia are former students at the school. They are currently on spring break from college and have come by to pay their respects.

“There are all sorts of rumours about why he did what he did. I just think he wanted to lash out. It didn’t matter who they were,” says Seasia of the gunman.

Kasey agrees. “This was such a safe, happy place. I live just a few blocks away,” she says pointing down the tree-lined road that runs alongside the school.

An affluent, picturesque neighbourhood, Parkland is located less than an hour’s drive north of Miami, and a 15-minute drive inland from the Florida coastline that draws holiday-makers from around the country. It is also one of the most left-leaning districts in the state of Florida – no Republican senator represents the district in the State legislature, while Democrats far outnumber Republicans in the House.

Since the Florida shooting, the students of Marjory Stoneman Douglas school have touched a political nerve across the country, emerging as unexpected champions of stricter gun control to prevent more mass shootings.

Their decision to travel to the state capital, Tallahassee, clutching signs reading “Gun Control Now” in the days following the shooting, and the forthcoming march for gun control in Washington on March 24th, is evidence of a political activism that reminds many of the anti-war protests that gripped the US 50 years ago during the summer of 1968.

The protests have not just been confined to this corner of Florida. From California to Pennsylvania, students staged protests in response to the Parkland mass shooting, urging politicians to act on gun control. Stars such as George Clooney and his wife Amal, Oprah Winfrey and Steven Spielberg have donated hundreds of thousands of dollars to the March 24th national protest.

Proponents of gun restrictions are hoping that this time may be different, that the energy and passion displayed by the Parkland students can translate into change. While the public has become used to a familiar pattern in the wake of a gun crime – the initial outrage which eventually peters out as the news cycle moves on – this time the outcry has not died down.

The decision by several businesses to change their gun sale policy, as well as the move by the Republican-controlled state legislature last week to legislate for tighter gun laws, is evidence to many of a changing attitude. Others have cause to hope that gun policy may emerge as a key issue in this year’s mid-term elections and governor- and state-level races.

Several Republicans, including Florida governor Rick Scott, who is widely expected to run for a senate seat, have moved to distance themselves somewhat from the NRA. Last week the Florida state legislature passed a series of gun measures that would have been unthinkable a few months ago. As the primary races get under way, some are facing political attacks from their opponents, eager to highlight their previous links with the NRA.

But whether the Florida massacre will lead to any significant change in the US constitutional right to own a gun is highly unlikely. Even among the young people gathered at Stoneman Douglas who were directly touched by the shooting, there is an acceptance that gun ownership is here to stay, even if the regulations and laws governing ownership are tightened.

“I personally don’t like the idea of owning a gun, but I understand that a lot of people see that as important. I get that,” says Kayley. “The issue is that this person should never have been allowed buy a gun. The breakdown in the system that was supposed to protect us is the problem. It’s the job of politicians to make sure that doesn’t happen again.”