From renditions to closed-door trials: What China’s security law means for Hong Kong

Law will punish crimes of secession, subversion, terrorism and collusion 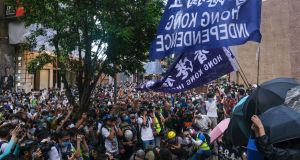 The possibility of Chinese agents whisking suspects to the mainland for trial and prison – a prospect effectively blocked last year amid large-scale protests against an extradition plan – is one of several changes that is alarming some in the legal, business and diplomatic communities.

The previously secret law for Hong Kong took immediate effect when it was published at 11pm (1500 GMT) on Tuesday, leaving many to scramble overnight to understand its full sweep across China’s freest city. Nearly 200 protesters, defying the new legislation, were arrested on Wednesday.

Hong Kong’s proudly independent judiciary, one of many freedoms guaranteed when the former British colony returned to Chinese rule exactly 23 years ago, has long been considered key to its success as a global financial hub.

The new law will punish crimes of secession, subversion, terrorism and collusion with foreign forces with up to life in prison, heralding a more authoritarian future.

Both Hong Kong and Chinese government officials have said the law is vital to plug gaping holes in national security defences exposed by months of sometimes violent anti-government and anti-China protests that rocked the city over the last year.

Significantly, the law allows Beijing to create a new national security agency in the city able to take enforcement action beyond existing Hong Kong laws in the most serious cases.

It even specifies that local authorities cannot inspect agents’ vehicles.

The mainland agents will have the ability to enforce mainland laws and take suspects across the border for trial, potentially eroding the strength of Hong Kong’s common law traditions.

Both Asian and Western envoys are watching developments closely, fearing their own nationals in the city could now be at greater risk, particularly as tensions spike between Beijing and Western governments over trade, human rights and the handling of the coronavirus pandemic.

‘Devils in the details’

The prospect of formalised renditions is evoking memories of the disappearance of a mainland tycoon from a hotel in the city as well others from Hong Kong in recent years, including a bookseller who said he had been abducted by mainland agents and is now in Taiwan.

Under the new law, Hong Kong will also have its own national security agency, that will supervise a special local police unit with extra powers of search, electronic surveillance and asset seizure.

“In that single article alone, they are reversing years of safeguards of human rights that have been built up by case law,” said Simon Young, a professor at the University of Hong Kong’s law school.

“The less we disturb this law by coming within its radar, the better,” he added, noting that even if Hong Kong’s courts applied the law according to common law principles, they could be overruled by China’s parliament.

Zhang Xiaoming, deputy chief of Beijing’s Hong Kong and Macau Affairs Office, said the mainland agency would abide by Chinese law and that Hong Kong’s legal system could not be expected to implement mainland laws.

Other lawyers described “the ground shifting beneath our feet”, saying it was unclear how the laws, drafted in Beijing, could be aligned with Hong Kong’s human rights protections.

The laws, for example, make several references to “state secrets”, linking their theft to the crime of colluding with foreign governments as well as providing for court cases behind closed doors and without juries.

While it grants the city’s leader the power to certify to a court that something is a secret, much greater clarity is needed, lawyers and diplomats said.

One senior Hong Kong barrister urged the Hong Kong government to clarify the many grey areas.

“Whoever drafted it was not apparently cognisant of common law principles, so it is proving very hard to fully grasp at this point,” the barrister said.

“There are likely to be all kinds of devils in the details.” – Reuters