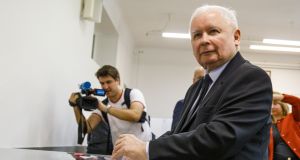 Poland’s nationalist Law and Justice (PiS) party was the clear winner of Sunday’s general election after early exit polls gave it nearly 44 per cent of the vote.

Preliminary projections saw the party of Jaroslaw Kaczynski jump nearly six points on 2015, enough to secure another absolute majority in parliament with 239 seats in the 460-seat Sejm.

“We got plenty, we deserve more,” said Mr Kaczynski to cheering supporters on Sunday evening in Warsaw. “Four years of hard work lie before us, because Poland has to change and we have to change ourselves for the better.”

He founded PiS in 2001 as a national conservative party but secured power in 2015 after adopting more leftist social policies with a popular children’s allowance. This time around PiS promised voters a 2,600 zloty (€600) monthly minimum wage next year.

Another cornerstone of its election campaign was framing Poland’s LGBT community as a threat to Polish identity, echoing similar claims about immigrants and refugees that it take power in 2015.

After a summer of violent pride parades, LGBT campaigners fear further incitement and violence under a new PiS government. Many of Poland’s judges will be wary, too, of another PiS administration after Mr Kaczynski’s Sunday-night promise of “change for the better”.

On the campaign train he vowed, if re-elected, to complete a controversial overhaul of what he calls an encrusted the court system.

That is contested by many domestic critics, lead by Poland’s independent ombudsman, Adam Bodnar.

“People are starting to understand that the takeover of the judiciary is not based on moral superiority arguments, the message presented by PiS, but a fight for power,” said Mr Bodnar to The Irish Times.

The ombudsman, whose office is a powerful independent instance for citizen freedoms and rights, says judicial reform is legitimate. But in this case he sees a partisan power-grab that links judicial appointments to party loyalty – with uncertain consequences for the separation of powers and rule of law.

“These judges never know if cases involving some level of politics or state interest could come up, and the state has leverage over you,” he said.

Mr Bodnar warns further judicial reforms could push his country on to a collision course with the EU. The European Commission has filed a challenge against the reforms with the Court of Justice of the European Union (CJEU) and a ruling is imminent.

A second PiS term could bode ill for the country’s media. In its first term, PiS transformed public broadcaster TVP into a government mouthpiece that slants news to reflect the ruling party’s political agenda and campaigns against its political rivals.

Mr Bodnar, a vocal critic of these changes and regular target of TVP attacks – said the broadcaster must return to its original mandate as “public property – not property of one party or government”.

Speculation is growing that PiS is planning a crackdown on private media outlets critical of the government. EU company law could make a direct attack difficult, Mr Bodnar said, but state companies could use its lucrative advertising spends to wield power.

“It seems to me they will try to take measures to make media market unstable that will not immediately attract EU attention,” said Mr Bodnar. “Pressure will be on creating an atmosphere where [foreign] owners would find it easier to sell media [holdings] than keep them.”