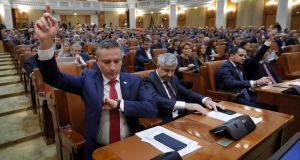 Romanian lawmakers: The PSD’s focus on watering down anti-corruption legislation and increasing government control over the judiciary drew criticism from Brussels and Washington. Photograph: Robert Ghement

Romanian president Klaus Iohannis is expected to appoint opposition chief Ludovic Orban as the country’s next prime minister, after welcoming parliament’s dismissal of a beleaguered government led by the populist Social Democrats (PSD).

The PSD’s focus on watering down anti-corruption legislation and increasing government control over the judiciary drew criticism from Brussels and Washington and sparked Romania’s biggest protests since the 1989 revolution against communism.

“Romania has won . . . The downfall of the PSD government is the natural result of the reaction of the whole society to the abuses and incompetence of this government,” Mr Iohannis said after the no-confidence motion succeeded.

She has vowed to stay on as PSD leader and challenge her fierce critic Mr Iohannis in next month’s presidential election, but polls give her little chance while making him strong favourite for a second term.

Mr Iohannis said that “on Monday, Tuesday at the latest” he would nominate a prime minister who would seek parliamentary approval for a government to lead the country through to elections scheduled for next year.

“The PNL has made it very clear that they are willing to take over the government. All other parties have said they will support one way or another such an approach. So . . . it is quite clear that we are heading towards a government of, or around, the PNL,” Mr Iohannis said after initial talks with party leaders.

The PSD did not recover from a triple blow suffered in May, when it performed poorly in European elections, lost a simultaneous referendum on its legal reforms, and saw party chief and de facto government leader Liviu Dragnea jailed on graft charges the following day.

Ms Dancila subsequently tried to distance herself from Mr Dragnea, suspending reforms that he championed and assuring Brussels that Romania was not going to follow Hungary and Poland in repeatedly clashing with the EU on questions of the rule of law and democracy.

Mr Dragnea and his allies forced her out of the DNA last year and lobbied other EU capitals to block her bid to lead the new European Public Prosecutor’s Office, which will investigate the theft of funds allocated by the bloc to member states.

“The last two years have brought on a massive and very aggressive attack against the [Romanian] judicial system,” Ms Codruta Kovesi told the Associated Press in an interview published last week.

“Laws were amended, prosecutors and judges were attacked and humiliated, there was a true campaign of disciplinary actions against personnel.”