Europe Letter: Italian ambassador to the EU sees the crisis as a test of the union’s cohesiveness and solidarity 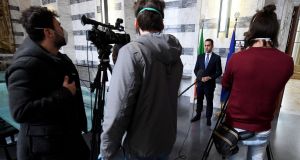 It was a black Thursday in Italy. The country was in lockdown. Coronavirus deaths were soaring. Hospitals were overwhelmed, with more patients than available equipment. Italy’s youthful deputy prime minister and foreign minister Luigi di Maio addressed the public from his office, speaking directly into a hand-held camera streaming live on Facebook.

“I wanted to show you the first help that has arrived. From China, ” Di Maio said. He pointed to his laptop, which played a video of people in face masks descending the steps of an aeroplane.

“These are the specialised medical staff who faced the coronavirus emergency in China, and in this moment have arrived in Rome,” Di Maio said. “This is the aid. There are the first 40 ventilators, there are masks,” he said as the screen showed blue crates being unloaded. “This is what we call solidarity.”

Di Maio was also pointing out the aid that hadn’t come.

It’s one of a series of slights playing into existing bitterness in Italy towards the EU, which has been fanned by years of austerity and helped bring euro-critical parties such as Di Maio’s Five Star Movement into power.

Media coverage of Italy’s initial outbreak from northern countries was at times unsympathetic, and governments briefed that Rome’s response was over the top. The French ambassador to Rome was forced to apologise after a skit about a “Corona pizza” by French television caused outrage. An eagerly-awaited intervention by the European Central Bank last week failed to help.

“We are not here to close spreads,” said its president Christine Lagarde, in an abrupt dismissal of hopes that the bank might act to reduce increasingly expensive borrowing costs. The remarks added to market turmoil that caused a record 17 per cent drop on the Milan stock exchange, and sent Italy’s borrowing costs even higher.

In contrast to all this the aircraft from Shanghai has made a powerful impression. China is making the most of the propaganda value of the aid, co-ordinated by its National Health Commission and Red Cross Society of China, to override previous associations as the origin of the outbreak.

“You see your true friends in the time of need,” the Chinese embassy in Rome wrote on its Twitter page, a stream of homages to Italo-Sino solidarity.

Messages circulate on social media in Italy reflecting the sentiment. The aid was followed by a donation of a million face masks and 100,000 test kits from Chinese tech magnate Jack Ma in boxes stamped with the stirring lyrics of “Nessun dorma”. He also sent aid to France, Slovenia, Spain, the US and the 54 countries of Africa.

The pandemic is increasingly the subject of a propaganda war between global powers against the backdrop of a trade war and increasingly toxic relations between Washington and Beijing. US president Donald Trump has taken to calling it “the Chinese virus”, while Chinese officials promote a conspiracy theory that the disease originated in the US.

It’s worth remembering that Italy is a battlefield of influence, and, as the EU’s third largest economy, a crucial one.

Last year Italy became the first G7 country to endorse China’s Belt and Rail Initiative, a massive infrastructure and influence project to connect the continents, risking the ire of Washington and Brussels in the hopes of bringing investment to its long-stagnant economy.

This year was supposed to be “Italy-China 2020”, a year of tourism and cultural exchange to mark half a century of diplomatic relations between the two.

The European Commission is attempting to play the game of geopolitics too, albeit within the usual limits of its power and charisma.

“Dear Italians ... you are not alone,” commission president Ursula von der Leyen said in message delivered in her best Italian. “Italy is part of Europe, and Europe suffers with Italy.”

The commission reprimanded France and Germany for blocking exports of face masks in the scramble for equipment, eased spending strictures for member states, and unleashed billions in funding for Covid-19 research and to shore up economies.

It has also tried to co-ordinate a collective approach to medical procurement and border checks. Yet as health and borders are national powers, EU countries can ignore much of this, and have done so with abandon.

The disease is turning out to be the EU’s greatest challenge yet.

“The coronavirus crisis is a test of the EU’s cohesiveness and credibility – one that can only be passed through genuine concrete solidarity,” warned Italy’s ambassador to the EU Maurizio Massari.

“If we are courageous and united, we will win. If we are selfish and divided, we will lose.”