Migrants used as pawns as EU takes a hard line 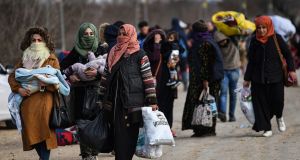 Migrants carry belongings towards the Pazarkule border gate in Edirne in northwest Turkey as they try to enter Europe. Photograph: Ozan Kose/AFP

The young man sank to the ground, blood covering his face as the crowd around him fussed at his clothes in a vain attempt to help.

The shaky footage was posted by BBC journalist Mughira al-Sharif, who said it showed the last moments of a Syrian man shot in the neck by Greek border guards as he tried to cross from Turkey.

A spokesman for Greek police called me to insist it hadn’t happened. “It’s absolutely fake. There is no such incident,” he said hotly. The government later called it “Turkish propaganda”.

But within hours Channel 4’s Paraic O’Brien had tracked down an eye witness, and reporter Jenan Moussa named the dead man as Mohammad al-Arab, a preppily dressed 22 year old who had fled Aleppo as a child and worked in a shoe factory in Istanbul before taking his chance to reach Europe.

He was one of thousands encouraged by Turkey to break for the border as President Recep Tayyip Erdogan declared “the gates are open” and laid on buses to help.

The European Union signed a deal with Erdogan to curb the last migration crisis in 2016 by holding back crossings in return for financial aid. In doing so, member states handed Erdogan an ace.

“Hundreds of thousands have crossed, soon it will reach millions,” he gloated as he played it.

The evidence of violence against the migrants on the EU borders, which undermines a regional power that brands itself as a bastion of human rights and international law, is being used in the game too.

Turkey disseminated video of Greek coast guards jabbing at a rubber dingy of people trying to cross by sea and firing shots into the water. Moscow-run broadcaster RT went big on footage of frustrated young men tossing stones as Greek guards pummelled them with tear gas.

It’s a sideshow to the war on the other side of Turkey, in Syria.

Ankara is locked in conflict over the border with the Russian-backed government of Bashar al-Assad. The United Nations says that bombing by pro-government forces has rendered much of the province of Idlib “uninhabitable”, driving almost a million people to flee. More than 60 per cent of them are children, several of whom have frozen to death in their makeshift encampments.

“There is a war crime of intentionally terrorising a population to force it to move. I think we’re seeing that picture emerging very clearly in Idlib,” said Hanny Megally, a member of a UN inquiry into the Syria conflict.

Nobody expected the EU’s deal with Turkey to resolve the original driver of migration, which is suffering.

But it did buy time. Europe failed to use it to reach consensus on how to deal with an issue that is not going to go away.

Border states such as Italy and Greece have been crying out for help for a decade, unhappy at the disproportionate burden placed on them by the Dublin regulation, under which people must seek asylum in the first country that registers their arrival.

Plans for a system to share responsibility have been blocked, and proposals for centres to process asylum claims outside EU borders failed to fly.

A state of permanent emergency reigns in the absence of co-ordinated response. Thousands of people live in camps across Europe. Perversely, the situation favours those able to make arduous journeys over the most vulnerable.

The new president of the European Commission, Ursula von der Leyen, travelled to the border this week to make sure Turkey knows she will not allow a repeat of the last migration crisis.

Almost 1.2 million people claimed asylum in von der Leyen’s native Germany in 2015-2016, a number that dwarfs all other EU nations, after chancellor Angela Merkel declared the country could cope. Since then, the nationalist anti-immigration Alternative für Deutschland has exploited the issue to become an electoral force to rival traditional parties.

As the EU draws its hard line, it has begun speaking the AfD’s language.

The von der Leyen administration proposed a new role to manage the migration portfolio called “vice president for protecting our way of life”, a cumbersome title that adopts a far-right premise. (“Protecting” was watered down to “promoting” after a furore,) This week she praised Greece as Europe’s “shield”, using the Greek word “aspida”.

Greek prime minister Kyriakos Mitsotakis translated the term to ensure everybody had understood.

“The problem now is not a refugee or migrant problem, it is an asymmetrical threat at the borders of Greece which are the European borders as well. The illegal invasion of thousands of people threatens our territory,” Mitsotakis said. “If Europe is to protect its citizens, it needs to be able to protect its borders.”